The evening session of the quarterfinal day at the World Men’s Youth Championships offered exciting encounters.

The last quarterfinal duel produced the same result and a surprise. The Netherlands beat Montenegro 12:7. For the first time in history, the Netherlands will play in the semifinals of the World U18 or U20 Men’s Championships. Moreover, the Dutch debuted at the World U18 Championships this year. The outcome is a little bit surprising, but since the start of the tournament, the Dutch have played well. So, nobody expected a one-sided contest in the game Montenegro-Netherlands.

Serbia and the Netherlands will face off in the semifinals tomorrow (20:30). Hungary will play against Spain in the first semifinal encounter (19:00). These two teams secured their semifinal berths in the afternoon matches.

Full schedule at the end of the article.

The encounters between water polo teams of Serbia and Croatia all always derbies in all age categories. However, considering how both teams played in the group stage and the fact that the tournament is in Belgrade, Serbia was the favorite.

But, Croatia silenced the home fans in the opening minutes. The Croats, who also had support from the stands, got off to a flying start and earned a 3:0 lead. The Serbs got on the scoreboard in the 6th minute. Shortly after they reduced the gap to one (2:3), Mozara doubled Croatia’s advantage. However, the Serbs trailed by a goal before the second period (2:4).

The Serbs opened the second quarter in the same way as the Croats did in the first – with three straight goals and turned around a 1-goal deficit to a 6:4 lead. The Serbs’ defense, commanded by goalkeeper Radoslav Virijevic (MVP of the match), was up to the task in the second quarter. But, Pavlic narrowed the distance in the dying seconds of the first half (5:6).

All photos by Slobodan Sandic/Water Polo Federation of Serbia

At the beginning of the second half, the Serbs regained a 2-goal lead (Kojic from a man-up for 7:5). In the following minutes, the Croats missed a few chances with a power-play advantage. The turning point was Serbia’s two goals at the finish of the quarter. In the 22nd minute, Croatia earned a man-up, but Marko Dimitrijevic stole the ball, and started the counter attack. Goalkeeper Cubranic fouled him in that action, and the Serbs had an easy man-up situation. Kovacevic sent the ball in the empty net for 8:5. Dimitrijevic converted a man-up a second before the last break for 9:5. Serbia controlled the match in the final quarter and stretched the margin to five.

“Croatia opened the match very well, but we consolidated ourselves in the second and third periods. We played defense as we should play in these two quarters, especially with a man-down. Our good 5-on-6 defense in the middle of the match was crucial for the outcome, Uros Stevanovic, Serbia’s head coach, said.

“After a very good start, we couldn’t control emotions. The boys wanted to build a big advantage as soon as possible, and finished many of the attacks rashly and too early. Serbia, which is a good and a better-prepared team, made the most of it. We were still in the game until the third period, but we missed a few man-ups in that quarter, and couldn’t come back. Congratulations to Serbia. They were better.”

In the last few days, we have underlined a few times that this generation of Dutch water polo players had a bright future. The Dutch proved their great potential in the quarterfinals and beat Montenegro, one of the medals’ favorites.
The Dutch earned an opening 3:1 lead. Montenegro started coming back and caught up with the rival in the opening minutes of the second period (3:3 and 4:4). In the middle of the quarter, Nedjo Bastrica put Montenegro in front for the first time (6:5). Reijchard responded with an equalizer immediately. The sides were tied at 5:5 at halftime. 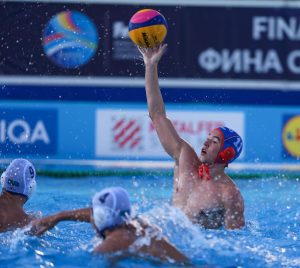 Lazar Vukcevic scored for 6:5 to open the third quarter, but after that a bad period for the Montenegrins started. In the next possession, Ten Broek equalized – 6:6, while the Dutch scored three more goals by the end of this quarter. Harreman, gave them a 7:6 advantage with a tricky shot. In the next possession, Montenegro failed to convert a double man-up and paid for it. The Dutch took control. They earned a 6 on 4 in the 21st minute and made no mistake. Groendendijk scored for 8:6. Daan Bakker closed the quarter with a counter-attack goal and the Dutch earned a three-goal lead for the first time (9:6).

Montenegro scored the first goal in the fourth period, but the Dutch responded with three for great success and a ticket to the semifinals.

Branko Mitrovic, the head coach of the Netherlands, said:

“These boys have been training intensively for three and a half years. The win over one of the favorites is a fruit of that long work. We prepared for the quarterfinals detailed and beat Montenegro thanks to a team effort. The players showed a big wish they played bravely, were very motivated and deserved the win.

“We knew that the Netherlands had a good team and that it would be difficult to play against them. But we didn’t follow the plans we made before the game. I congratulate the Netherlands for the deserved victory.”