So, just like that, the Commonwealth Games is over for another four years. After ten days of terrific action in Birmingham, Australia eventually came out on top of Jamaica, with New Zealand upsetting host nation England in the battle for bronze. On court, we saw some familiar names in starring roles, while some new ones were thrust into the spotlight. With thanks to Longines who compiled statistics for the Commonwealth Games, we thought it would be good to look back at some of the different categories to see if we could learn anything from them with a view to how teams performed and how they may fare in future international matches. Some players and teams are exactly where you’d expect them to be, but some others may surprise.

Firstly however, we need to update the team records after this tournament, and we start with the winners, Australia. They have now made the final of all seven tournaments, for four gold medals. In Birmingham, they became the first team to lose a game on the way through to claiming gold. Their loss to Jamaica was also the first time they had been beaten in a match that wasn’t a final. For Jamaica, it was their first win over Australia in Commonwealth Games history. The Jamaicans went on to make the final for the very first time, claiming their highest ever placing. They also recorded their highest score and biggest winning margin (79 goals) when they defeated Barbados 103-24.

With their third place finish, New Zealand has claimed a piece of history. They became the first country to win at least one of each colour medal at the Commonwealth Games. England won all five group matches in Birmingham which took their winning streak to 12 matches after their undefeated tournament on the Gold Coast. Unfortunately, they then became the first country to top their group but fail to win a medal. Uganda finished 5th, improving on their 6th place in 2018. They had their biggest winning margin of 37 goals against Northern Ireland (63-26) while also recording their lowest score and biggest defeat (21 goals) in the 56-35 loss to England.

South Africa’s loss to Uganda means they have won just 2 of their 6 matches against African opponents at the Commonwealth Games. Scotland recorded their highest score and biggest winning margin (44 goals) in the 72-28 defeat of Barbados. Northern Ireland’s lowest Commonwealth Games score came against New Zealand when they were beaten 79-20. Trinidad & Tobago’s lowest score of 22 goals came against England, and their biggest defeat (56 goals) came when they were beaten 80-24 by New Zealand. Barbados recorded their lowest score of 18 goals against Australia, and also their biggest defeat (79 goals) in the loss to Jamaica.

Jhaniele Fowler. Image Sue McKay/Kick It To Me Photography

Let’s look at some of the standout statistics from Birmingham. Within the shooting category, there are certainly no surprises here. Jamaican captain Jhaniele Fowler finished on top in terms of goals scored, from Australia’s Gretel Bueta. In terms of the highest shooting percentage however, Fowler (273/281) was actually pipped by just 0.01% by her Jamaican teammate in Shimona Nelson who shot 137/141. Bueta was not far behind the two Jamaicans with 253/263. Unsurprisingly, Jamaica and Australia finished with clearly the most goals during the tournament, and at the greatest accuracy. At the other end of the scale, one figure which stands out is the very low shooting percentage for Northern Ireland. They scored from just better than two out of every three attempts. This poor conversion rate really hampered their attempts to remain competitive with opponents. 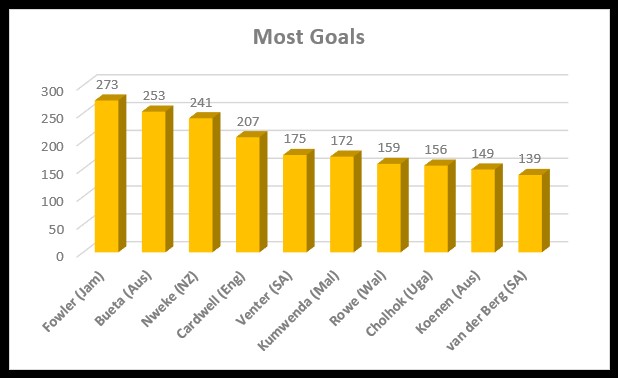 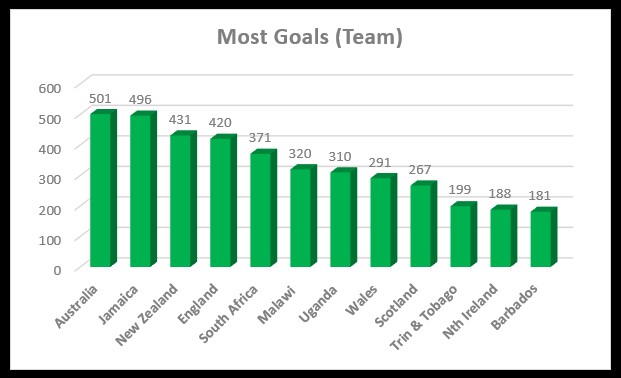 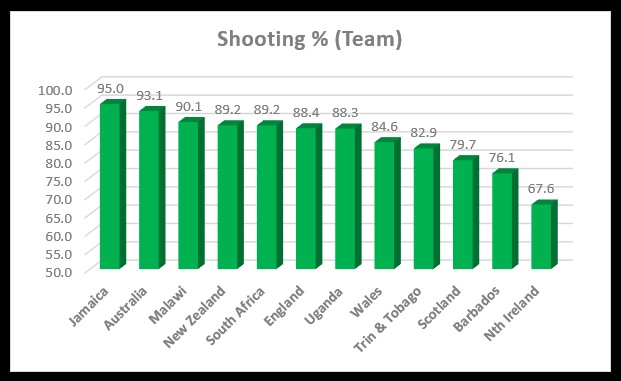 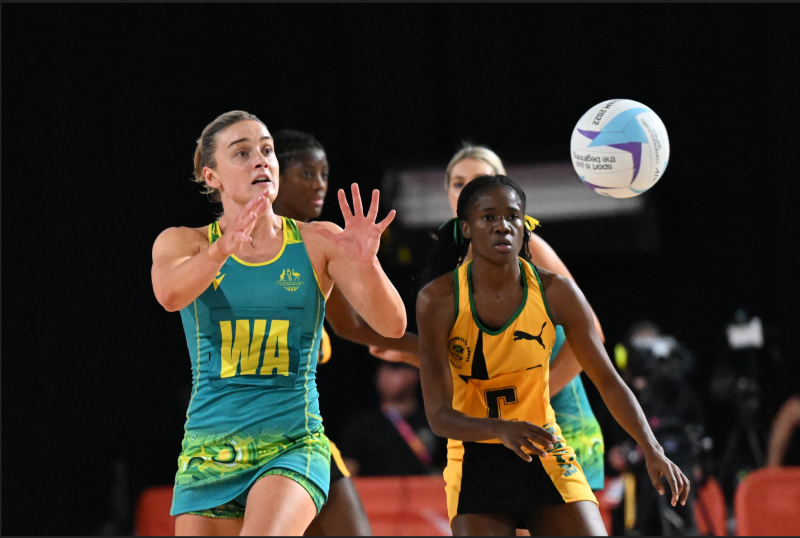 Liz Watson Image: Sue McKay | Kick it to Me

Now, onto the midcourters and feeders. A few familiar names pop up here, but also some that you may not expect. With Paige Hadley out injured for most of the tournament, Australian captain Liz Watson perhaps had more court time than she would otherwise have had, but in any case, she finished comfortably clear of the pack in terms of assists and circle feeds, and was second with centre pass receives. England captain Nat Metcalf and Malawi midcourter Takondwa Lwazi were the other players to round out the top three for feeds and assists. It was a fine achievement from Lwazi to be second overall for goal assists in a team that finished seventh. In terms of centre pass receives, Jamaican goal attack Shanice Beckford came out on top. 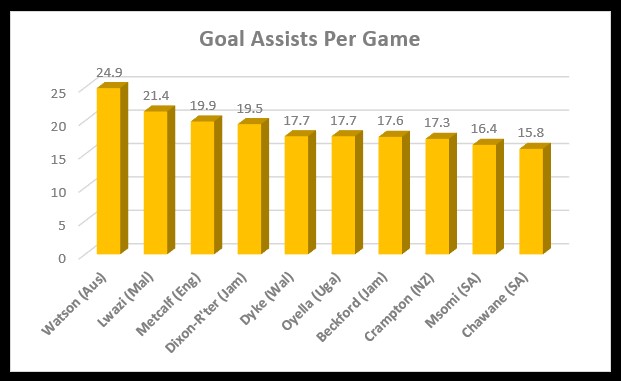 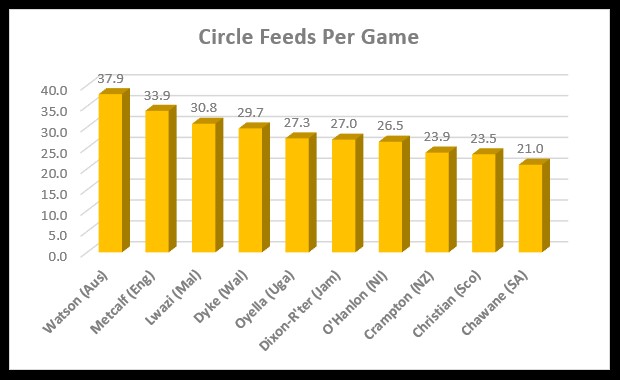 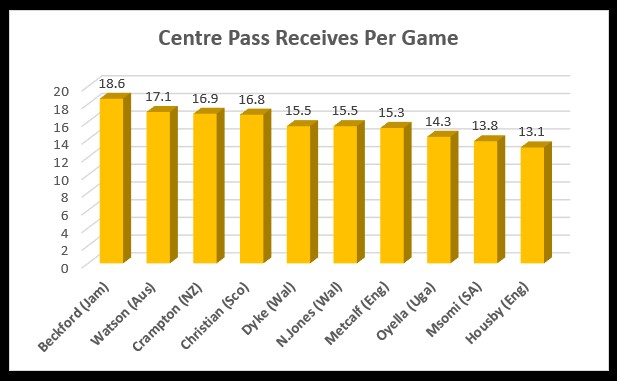 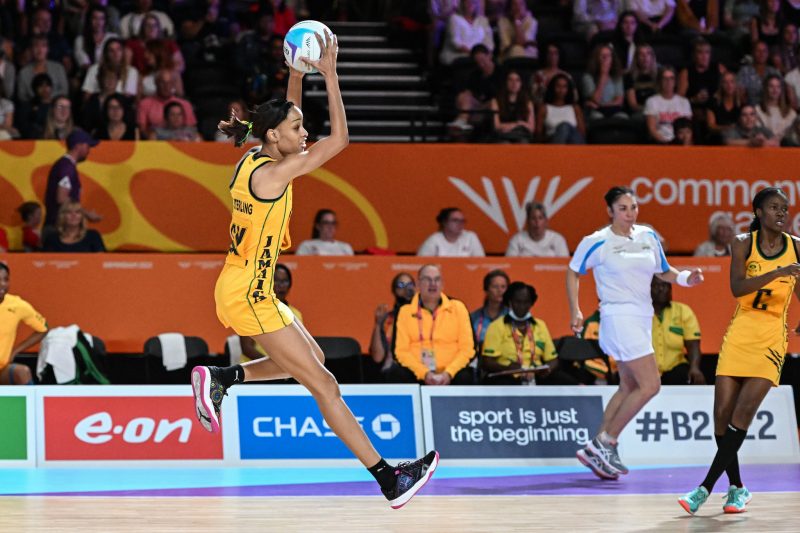 Shamera Sterling. Image: Sue McKay / Kick It To Me Photography

In defence, two players stood out statistically. They were Shamera Sterling of Jamaica and Shaqanda Greene-Noel of Trinidad & Tobago. It wouldn’t shock anyone to see Sterling’s name there, but Greene-Noel would have been a surprise to some who haven’t followed her exploits in the VNSL. She had an incredible 49 possession gains from just six games, and all that while playing in a team which placed 11th. In overall terms, it was Jamaica and Australia that dominated the gains category. So, we can see that those two countries not only scored more goals than anyone else, but also had more gains. A tough combination to beat. Sterling finished on top of the intercepts category, averaging almost four per game, while it was Sterling’s teammate Latanya Wilson who topped the deflections list. 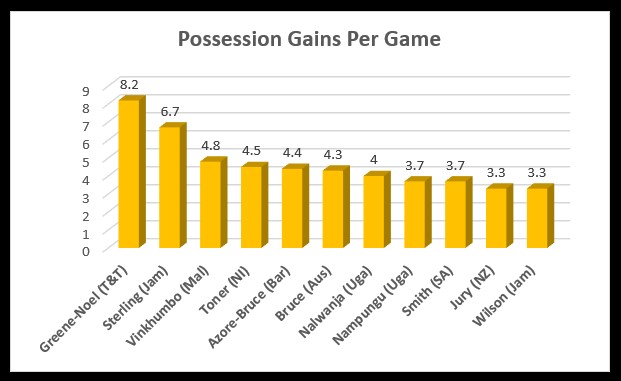 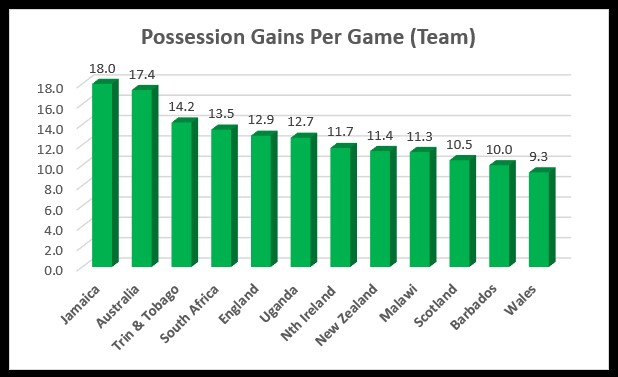 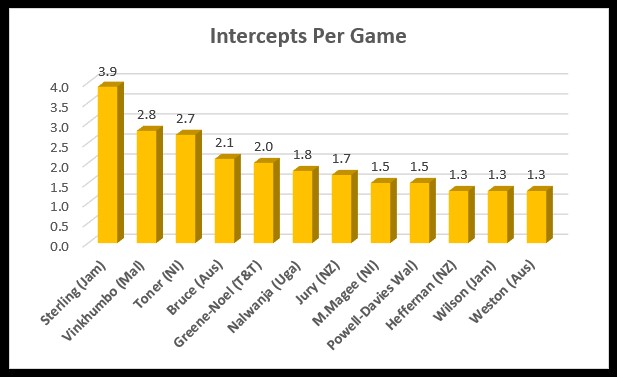 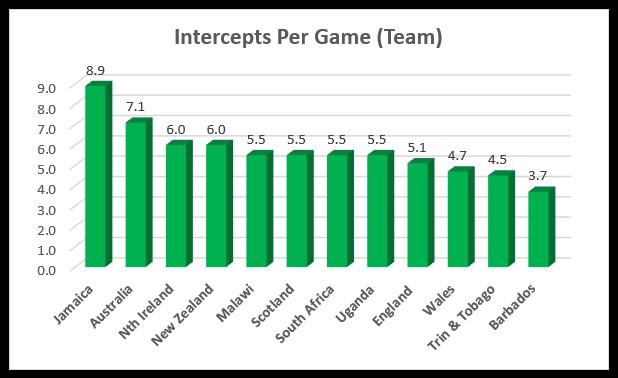 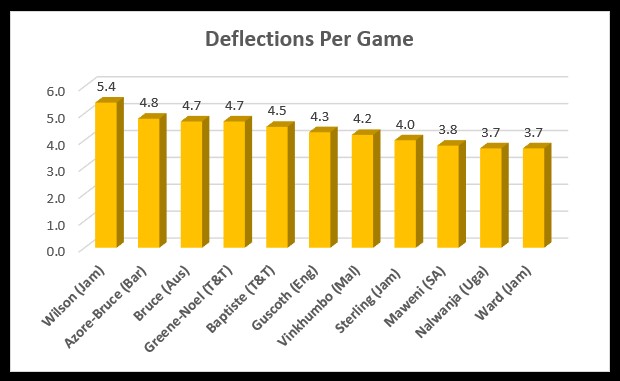 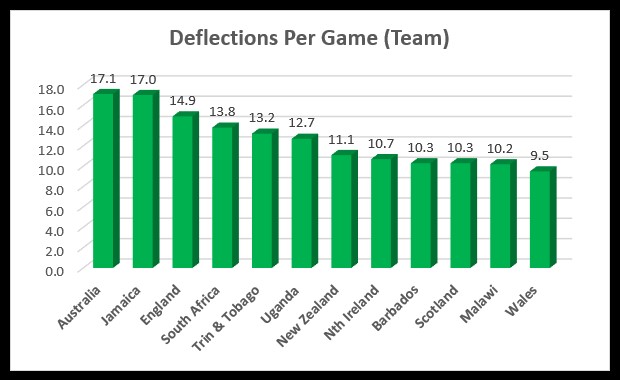 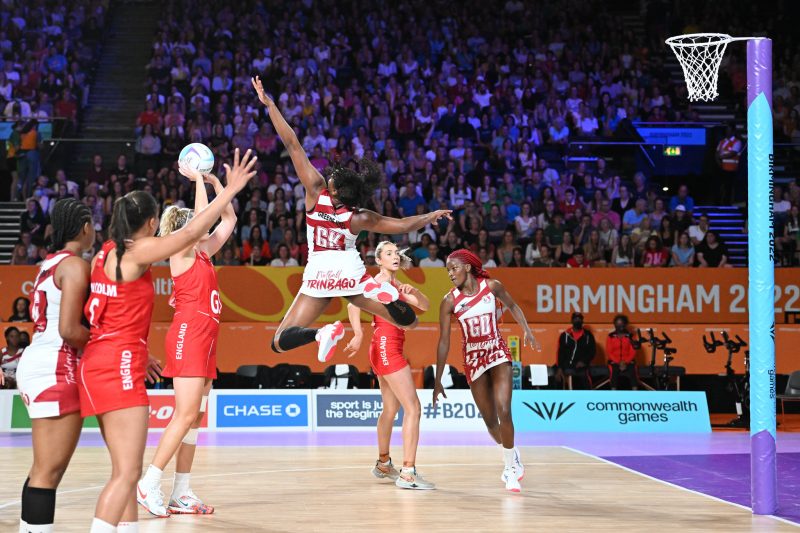 Shaquanda Greene-Noel was the Queen of the rebounds in Birmingham. She finished with 24 from her 6 matches, and with shooter Afeisha Noel also pulling in 15 rebounds at the other end of the court, Trinidad & Tobago finished on top of this category. It’s interesting to see England so far down the list for rebounds with none of their players making the top ten. They did better on the pickups front, finishing third in that category, but it was Australia that came out on top, narrowly ahead of Wales. It was Shamera Sterling again who led this category, from Greene-Noel and Christina Shaw of Wales. Surprisingly, New Zealand was at the bottom of the list for pickups. 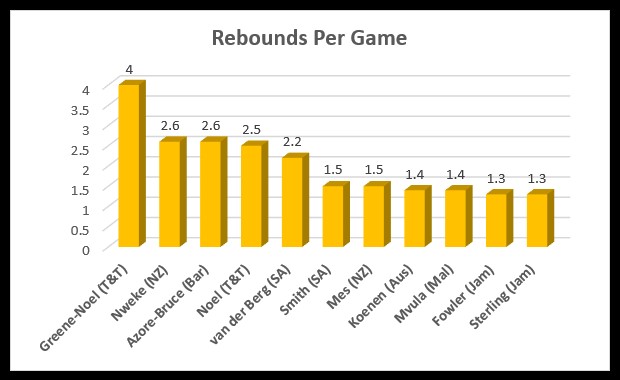 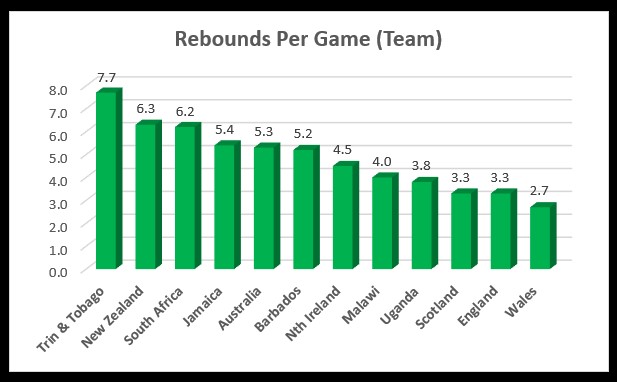 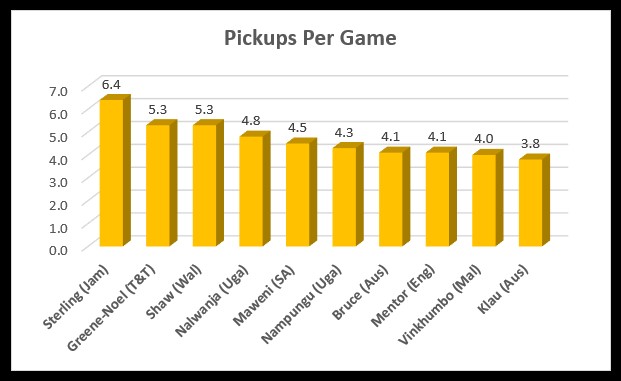 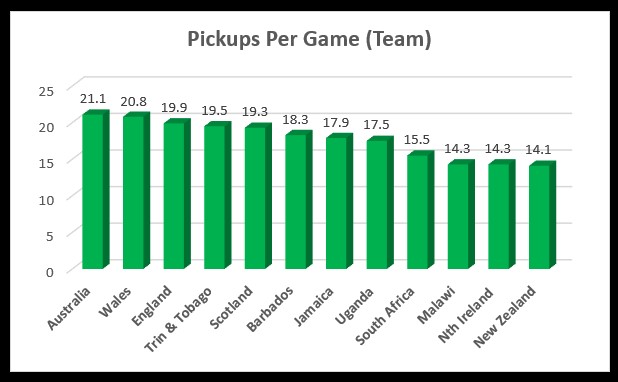 It is quite remarkable that Jamaica managed to grab so many possession gains, while still remaining so clean in the process. In Birmingham, they conceded the fewest contact penalties of any team, and overall they averaged 5.3 penalties per game less than their nearest rival. At the other end of the scale, it may surprise some that the most penalised country was Northern Ireland. Their 420 penalties in 6 games, was made up of 288 contacts and 132 obstructions. They were just narrowly ahead of South Africa. The England team, which gave away a respectable 56.4 penalties per game, actually conceded the most contact penalties of any team, but their obstruction penalties were low by comparison. South Africa’s goal keeper Phumza Maweni has the dubious honour of being the most penalised player in Birmingham; 107 in total, made up of 72 contact penalties and 35 obstructions. Shaquanda Greene-Noel wasn’t too far behind with 102. Well done to Nia Jones of Wales who was the most penalised player in 2018, but is sitting comfortably outside the top ten on this occasion. 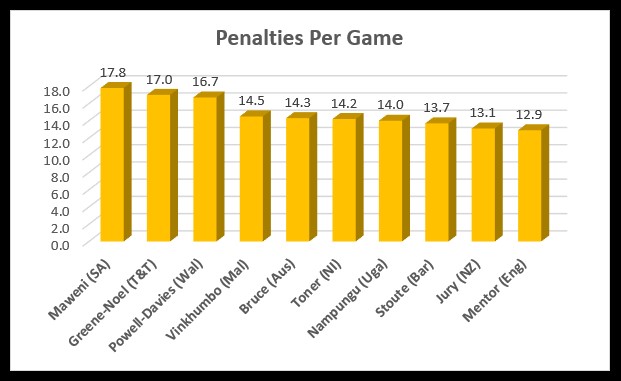 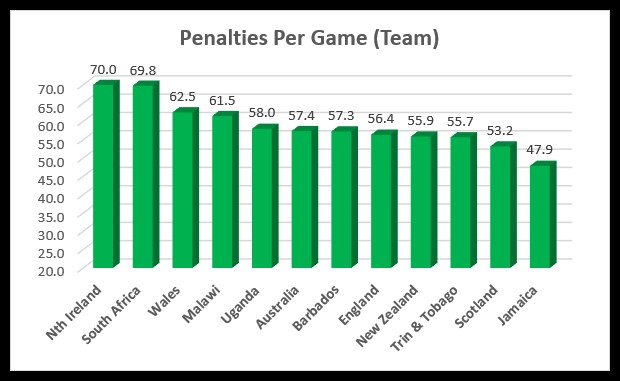 To finish off, congratulations to all the players who brought up milestones in Birmingham, but especially to Latonia Blackman of Barbados, and Geva Mentor of England, who both competed in a record sixth Commonwealth Games tournament. 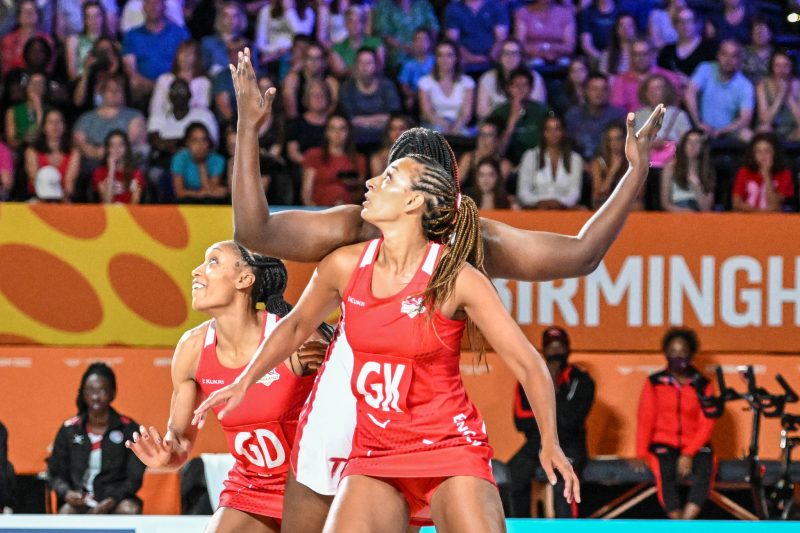 Geva Mentor. Image Sue McKay/Kick It To Me Photography