Tottenham Hotspur midfielder Pape Matar Sarr has been handed a huge boost before returning to the north London club in the summer.

Will Sarr get game time next season under Conte? 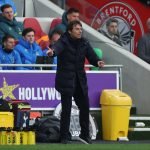 The north London side completed the signing of the 19-year-old last summer from the Ligue 1 side Metz, however, Spurs instantly loaned the midfielder back for the 2021/22 season.

Metz have had a difficult campaign in Ligue 1 and find themselves in the relegation play-off spot with the final game of the campaign to come this weekend.

It has been an inconsistent season for Sarr in terms of a regular spot in the Metz starting XI, but Gold has been encouraged massively by what he has been through with a struggling Ligue 1 side.

Gold said: “He’s really come to the fore the last couple of games, especially. As a 19-year-old in the centre of that midfield, that’s a big thing.

“He was the second-highest-rated player on the whole pitch [v Angers] with a score of 7.58 and their ratings are quite hard – you’re not going to get nines and tens – they’re quite tough because it’s all stat-based.”

“So all over the shop – in a good way, you know, kind of box-to-box stuff, and that’s huge.

“This has been a really crucial few weeks. Whatever happens for Metz, I think that’s a big thing for him mentally to come to Tottenham in the summer, having had that experience of having to grab the games by the scruff of the neck when it’s a real battle. That’s a massive educational experience and also just something to help you grow up, I guess.”

We are interested to see what type of role Sarr will have at Spurs when he finally joins up with his new side in the summer given Antonio Conte does seem to have a solid set of three central midfielders.

Pierre-Emile Hojbjerg, Rodrigo Bentancur and Oliver Skipp have played big roles this season for Spurs and we would not expect this to change for the 2022/23 campaign.

The same cannot be said for Harry Winks, whose future is in doubt, but it is also believed Conte is already looking at adding an experienced central midfielder in the summer.

So we do wonder where Sarr will fit in. Spurs will have a lot of games to contend with next season with some form of European football guaranteed, however, does that even provide Sarr with a look-in?

In other news: ‘Echoes of Lasagnegate’ – Gold now issues worrying Spurs claim ahead of Norwich clash

Tottenham Hotspur fans on Twitter have been reacting to the latest transfer announcement from the north London club. This comes after the official Tottenham Twitter account shared a post announcing that they have secured the signing of […]

The football journalist, Fabrizio Romano has been speaking on his latest Twitch stream about all things transfer related. One name which was mentioned during his stream was the reported Tottenham Hotspur target Takehiro Tomiyasu of Serie […]