Nakhon Pathom, Thailand, August 7, 2022 – Fired-up Japan and debutants Bahrain enjoyed their comfortable straight-set wins on the opening day of the 2022 AVC Cup for Men at the Nakhon Pathom Provincial Gymnasium on Sunday, while hosts Thailand survived a huge scare from Hong Kong, China to pull off a hard-fought three-set thriller.

In the curtain-raisers, powerful Otake Issei scored a match-high 19 points to steer Japan, fielding their second-string B team, to a convincing straight-set 25-15, 25-15, 25-15 triumph over India, represented by the U20 squad, in Pool C. Bahrain, which participated in the topflight AVC Cup for Men for the first time ever here in Nakhon Pathom, made much of the impact in Pool D as they performed exceptionally well to stun Chinese Taipei in straight sets 25-18, 25-21, 25-16 for their historic win in this top-tier competition. 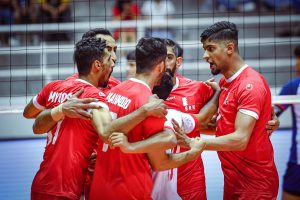 Last May, the Bahrainis, coached by Brazilian tactician Issanaye Ramires, picked up silver at the 3rd Gulf Cooperation Council Games in Kuwait, while Chinese Taipei also proved a strong team to be reckoned with in this tournament as they finished fourth place at the last year’s Japan-hosted Asian Senior Men’s Championship and most of them veteran players who played in the gold-winning Taichung Bank Club at the 2015 Asian Men’s Club Championship including left-hander Wu Tusng-Hsuan and Liu twins – Liu Hong-Jie and Liu Hung-Min. Earlier, hosts Thailand faced a tough task against Hong Kong, China, under the close supervision of FIVB Instructor & High-Performance Coach Dragan Mihailovic from Serbia. The strong visitors fought back hard against the host side, which fielded a good mix of young and experienced players including left-hander Amorntep Konhan, tall and towering hitter Kantapat Koonme and highly-skilled setter Mawin Maneewong and gifted Napadet Bhinijdee. Despite a strong challenge from Hong Kong, China, spearheaded by hefty Tam Chun Ho Damian, Thailand lived up to all expectations to see off the rivals in thrilling straight sets 25-22, 30-28, 25-23 in their Pool A match. With only top two teams in each pool advancing to the round of last eight teams, all three losers – India, Hong Kong China and Chinese Taipei will play their next match with backs against the wall. India will play a must win match against Australia, the team with great experience from VNL and the recent Challenger Cup in Korea. Hong Kong, China will also need a crucial win against Korea in Pool A to keep their high hopes of advancing to the next round alive, while Chinese Taipei will next face China, one of the continent’s powerhouses which shocked defending champions Brazil in straight sets on the last day of the Men’s VNL Week 1 in Brasilia. On Monday, the second day of the topflight eight-day tournament, India will take on Australia in Pool C, while Korea play their first match against Hong Kong, China in Pool A. The Pool B clash sees Iran pitted against Pakistan, but both sides guaranteed their berths to the next round since the pool features only two teams. All eyes will be on the last match of the day when favourites China are due to take on Chinese Taipei.