Tennis Channel’s 16th year of Roland Garros is set for May 22nd-June 5th.

Hall of Famer Pam Shriver, who set records and reached No. 1 in doubles during her playing days, and 2018 Australian Open champion Caroline Wozniacki, the first Danish singles world No. 1, will be in Paris for the network for the first time.

Matches from the 126th edition of Roland Garros will run all day on Tennis Channel again this year, with additional competition live and on-demand on streaming service Tennis Channel Plus, select Bally Sports regional networks around the country, and new Samsung TV Plus channel T2 – where they will be available for free.

Shriver will call matches for the network during the tournament. One of the most dominant doubles players of all time, she won 21 major doubles titles, including four at the French Open with current Tennis Channel analyst Martina Navratilova, and the 1987 French Open mixed-doubles championship. In addition to reaching the top of the doubles rankings she was an accomplished singles player, at one point ranked No. 3 in the world. She entered the International Tennis Hall of Fame in 2002.

“I have so many great memories of Roland Garros during my career, especially winning all four doubles tournaments I played with Martina there and capturing my only major mixed-doubles title,” said Shriver. “I can’t wait to be in Paris with the entire Tennis Channel team this year.”

In March, Wozniacki appeared on Tennis Channel as an analyst for the first time during the BNP Paribas Open and Miami Open, and will resume those duties in Paris this spring. The first person from Denmark to win a major singles title, Wozniacki is also the first woman from any Scandinavian country to reach the top of the singles rankings. She won 30 singles tournaments and two doubles events during her career.

Tennis Channel said it plans to be a “Roland Garros Channel” during the 15-day event, with live matches from the start of play in the morning through the night sessions on most evenings. Once the final match has concluded, the network will show encore replays throughout the late night and early morning up to the start of the next day’s play.

The typical schedule sees matches underway at 5 a.m. ET until the late afternoon ET, when encores begin. Tennis Channel says it “plans to show more than 140 live hours of matches from this year’s French Open, and another 185 hours of encores, dedicating 325 total hours to competition.”

New this year are daily, live matches on T2, the network’s free channel on Samsung TV Plus. Live matches on T2 run simultaneously with coverage on the traditional television network but are different competitions and different players, giving viewers the opportunity to toggle between two matches on air at the same time. 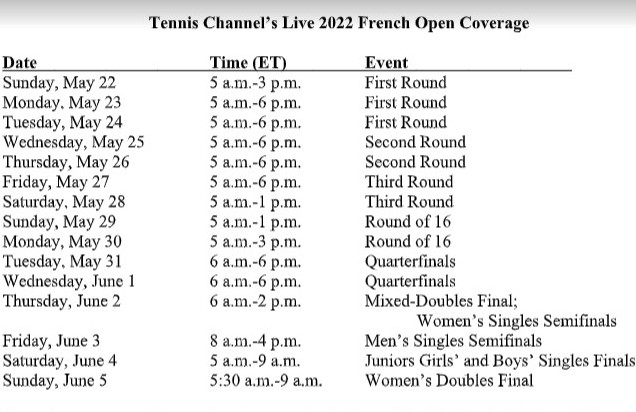