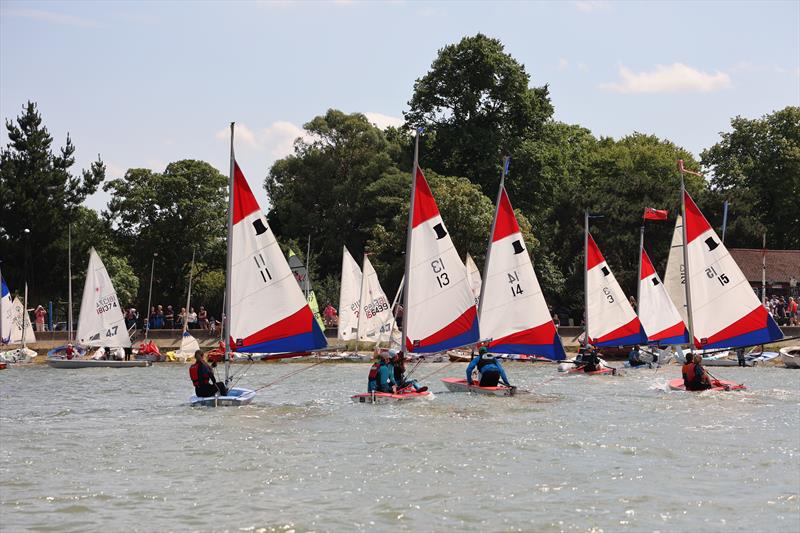 The second heatwave of the year heralded our annual Club Week which ran from 13-19 August. Events started with the Regatta that 103 boats and 166 sailors entered across ten fleets. The canons were used for starting and the entrants had great racing in champagne conditions with a steady f4 easterly wind.


The crabbing competition got under way while the races were on and when the Fireballs finished the ever popular ‘greasy pole’ competition started. A variety of other inshore games included swimming races and the cork race. The prize-giving was held late afternoon and then many members stayed on to enjoy a delicious hog roast.


As the heatwave broke down, we had generally good but very shifty sailing winds for most of the week including two days when the wind was gusting f6 which tested the heavy weather skills of our sailors and kept our safety fleet busy. We had a record 128 boats racing crewed by 202 sailors and started 69 races during the week. The largest fleet was the Medium Handicap which had 13 different classes and 31 boats, then the Lasers with 23, and the Wayfarers and Toppers/Teras each with 14.


It was great to see so many of our cadets taking part across the fleets and in many cases beating the adults! At the end of the week, the winner of each class took part in a race in Toppers on the river to decide the Cock O’ the Club – amazingly, this was won by talented international Optimist sailor Callum Marshall who at the age of 10 beat the club’s finest helms!


After a tiring time on the water, we ran a full social programme and over 100 members enjoyed the ever popular quiz on Tuesday night. Big thanks to Hatty Norman for setting the quiz and to Drac and Marg Norman for helping on the night.


The Commodore supper on Wednesday was Pirate themed with some great fancy dress. The evening started in the lower deck with lashings of Tommy’s secret ‘Dark and Stormy’ rum punch which created a warm glow! Excellent food followed from Maldon’s Chinese restaurant ‘The House of Delight’ and live music from the Hopkirks who really got the guests dancing the night away. Thank you to the cadets who helped serve the food and looked after us so well.


Overall, one of our best club weeks for years and many thanks to Steve Perkins our Sailing Secretary, Sheena Berney our Rear Commodore and all our staff and volunteers who worked so hard to make it such a safe and successful event.


Congratulations to our winners from each class:


Full results for the week can be found on our website at blackwatersailingclub.org.uk/BSC-Race-results/12219918