Phoenix Karaka (Mystics) was unavailable this week due to concussion. George Fisher (Steel) still appears to be managing a knee issue, leaving the game late in the fourth quarter. Maddy Gordon (Pulse) continues to be sidelined due to a knee injury.

An anxious Pulse bench looks on in the match against Mystics. Image: Nicole Mudgway

It was fantastic to see Fa’amu Ioane (Mystics) and Kayla Johnson (Stars) take the court for the first time this season. Ioane played for 26 minutes against the Pulse, picking up 2 intercepts and 1 gain. Johnson had a solid game at wing defence for the stars, playing for the full sixty minutes.

The impacts of COVID-19 on the league continued in Round 3. Mila Reuelu-Buchanan and Anna Harrison were unavailable for the Stars. Emma Iversen came out of retirement to provide cover at Centre along with Greer Sinclair who usually plays down the defensive end of the court. The Stars gave a valiant effort with an unfamiliar line-up, but the loss of these key players proved costly against the Steel.

Magic and Silver Ferns fans alike would have been excited to see the continued return of Ameliaranne Ekenasio to the court. This week the star shooter extended her playing time to 30 minutes and played in her more familiar position of Goal Attack. She had a strong game, shooting at 100% and provided strong drives across the circle on attack. The Magic still seem to be searching for an answer at Wing Attack. This week the position was shared by Georgie Edgecombe (usually a Centre or Wing Defence) and Ariana Cable-Dixon who returned to the league for the first time since 2020 following the birth of her child. Errors through the mid-court contributed to the side’s loss against the Tactix who picked up their first win of the season.

Katrina Rore may be missing from the netball court but she did make a welcome impact in the commentary team this week. Rore provided astute analysis along with some inside knowledge from the Magic. She described Bailey Mes as having a “licence to shoot” this year as opposed to acting primarily as a feeder into the Goal Shoot. It seems to be resulting in a confident shot, with Mes putting up 37 shots at 87% accuracy this week.

Player on the Rise

Savai’inaea has flourished since heading down to the Steel from the Pulse for more court time in 2021. The strong wing defender has established herself as a key member of the starting lineup for the Steel. Savai’inaea’s returned to the court in Round 3 after missing the previous game due to a hamstring niggle. Her impact was immense despite having the unenviable task of marking Silver Ferns’ captain Gina Crampton. Savai’inaea played a tight game, picking up 3 intercepts and 1 deflection. Her low error rate (no turnovers) and limited penalty count was also impressive. The Steel look like a more balanced side with Savai’inaea on the court. Her calm demeanour and strong work ethic are key attributes that ensure she has a positive impact on the game.  It will be exciting to see the powerful mid-courter continue to grow over the 2022 season. 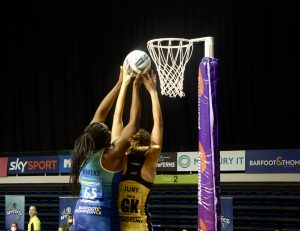 It was a great battle between Grace Nweke (Mystics) and Kelly Jury (Pulse). Image: Nicole Mudgway

Match of the Round

Netball fans were kept on the edge of their seats throughout this nail-biting match, with Mystics fans breathing a huge sigh of relief as the final whistle blew. Thanks to Grace Nweke calmly slotting her final goal to give the Mystics a one goal advantage with three seconds left on the clock, the Mystics scored their third successive win and their second over the Pulse in the last eight days. Although the loss will be disappointing for the Pulse, they improved on last week’s 6 goal difference and at least this time they secured themselves a bonus point.

The Mystics team were once again without Phoenix Karaka, sidelined this week due to precautionary concussion measures. The team came out firing though, forcing the Pulse to up their defensive game in order to slow down the momentum that the Mystics were building. The Pulse, with their noses ahead early in the fourth quarter, were moments away from securing the win when the defending champs showcased their class, putting out a 7 goal surge to bring themselves back into contention. The injection of Monica Falkner back onto the court part way through the last quarter was pivotal in taking some pressure off Nweke, ensuring the Mystics held crucial possession and converted turnovers to hold on for the win.

The full court defence employed by the Pulse resulted in a number of errors from the Mystics. Attackers Whitney Souness and Tiana Metuarau both created intercepts and deflections, and Kelly Jury had one of her best performances in the GK bib for the Pulse (6 gains, 3 intercepts).

The positional reshuffle caused by the insertion of Carys Stythe at GD for the Mystics once again worked wonders (Michaela Sokolich-Beatson to WD, Tayla Earle to C). We have seen it before and no doubt we’ll see it again, but Stythe brings instant impact and it has a flow on effect with Sokolich-Beatson and Earle seamlessly carrying the ball through the midcourt and onwards to Toeva and Nweke.

Where was the match won and lost?

The match was both won and lost in the last quarter. It could have been anyone’s game, so the Pulse will be kicking themselves for the missed opportunity. A flurry of uncharacteristic turnovers in the last five minutes saw both teams scrambling for the ball, however the Mystics did better to maintain composure, strategically playing down the clock in the last twenty seconds, preventing the Pulse from tying it up.

Kelly Jury silenced last week’s critics with a stunning defensive game, and had the Mystics not won, Jury would have received our vote for MVP. The midcourt combination of Souness, Erikana Pedersen and Paris Lokotui was mostly error free as they capably fired the ball down the court. As unusual as it is to see Pedersen in the Pulse colours and the C bib, she sure is owning it. And of course, Metuarau and Aliyah Dunn continue to impress: this magical duo play like they’ve been teammates for far longer than their young years even permit.

Finally given the start at WA for the Mystics, Peta Toeava wasted no time in flaunting her connection with Nweke, resulting in the Mystics scoring a massive 20 goals in the first quarter. Her connection with Nweke is unrivaled, and seemingly supported best when Earle is in C. The defensive unit of Sokolich-Beatson, Stythe and Fitzpatrick has quickly become a crowd favourite, and as recognised above, seems to have a beneficial impact when moving the ball down the rest of the court. 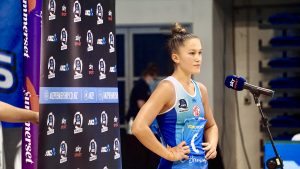 Tayla Earle picked up the Match MVP award for her performance against Pulse. Image: Nicole Mudgway

All matches will be shown live on Sky Sport New Zealand. Fans outside of New Zealand can view all matches on the NetballPass platform (www.netballpass.com).

Both matches involving Stars have been postponed. 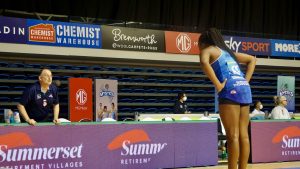