Ex-Chelsea star Oscar sees his move to Flamengo ‘CALLED OFF at the last minute by Shanghai SIPG after they go back on their agreement’ – despite the playmaker being pictured in the Brazilian club’s shirt two weeks ago!

Oscar’s proposed move to Flamengo has reportedly fallen through after Shanghai SIPG decided against signing documents allowing the deal to go ahead.

According to Fabrizio Romano, the player had already signed a contract on August 5 – and was even pictured in the Brazilian side’s shirt – which left Flamengo to believe there would not be any pitfalls as they prepared an official announcement.

However, less than two weeks after signing a deal to return to his homeland, Oscar, formerly of Chelsea, revealed on Twitter that he was keen to get the move over the line but that it was not possible at that time. 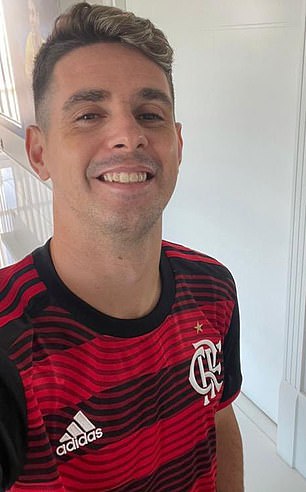 The 30-year-old midfielder sent out a tweet to explain the situation, saying: ‘I appreciate the interest of Flamengo and the fans, but it was not possible to do so at that moment.

‘I wish the club the best of luck and all the friends I have there for the remainder of this season. Thank you all!’

The Brazilian’s move to the Chinese Super League was one which caught the attention of football fans after he traded in a place in a Chelsea side that was on the verge of winning the Premier League, for a move viewed by many to be purely financially driven.

He joined the likes of Didier Drogba, Nicolas Anelka and Robinho in making the move to China, but notably was still only 25, whereas the other three were approaching the end of their careers at the top of the game. 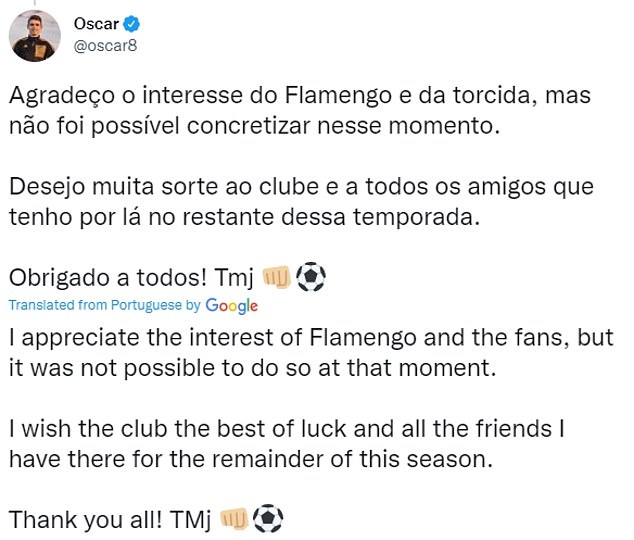 Oscar joined the Chinese side in 2017 for £54million, and has gone on to play 173 games, scoring 51 goals and assisting a further 94 winning both the league and Chinese Cup on one occasion.

Shanghai SIPG can count amongst their previous managers former Tottenham, Chelsea and Zenit St. Petersburg boss Andre Villas-Boas, who managed the club for 12 months between November 2016 and November 2017, and ex-England manager Sven-Goran Eriksson who was at the reins between 2014 and 2016.

Amongst Oscar’s team-mates for several seasons was his compatriot Hulk, who departed for his native Brazil in February 2021 to join Atletico-MG, where he would go on to link up with another former Blue in Diego Costa. 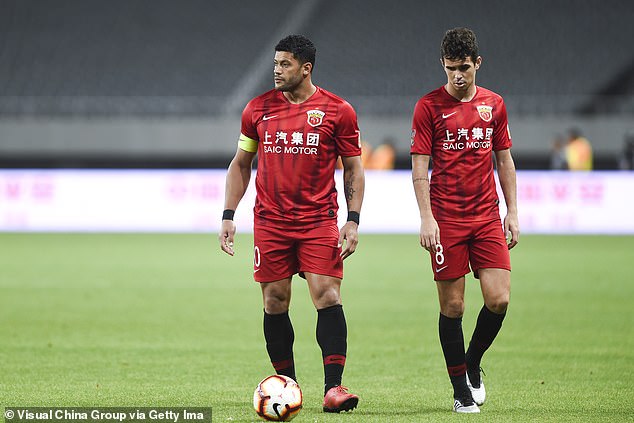 Flamengo defeated Cuiabá 2-0 at Arena Pantanal on Thursday night, thanks to Pedro and a late Thiago Maia goal. Flamengo performed admirably in the first half, but struggled in the second. The victory was Flamengo’s […]

A heck of a lot! Young Flamengo can earn millions for the club

July 26, 2022 c_admin Brasileiro Série A, Brazil, Football News, South America Comments Off on A heck of a lot! Young Flamengo can earn millions for the club

He is an 18-year-old Flamengo footballer who has played in only seven professional football games for the Rio de Janeiro club. But even so, he instills the red-black fan with high hopes.The young player received […]

June 16, 2021 c_admin Brasileiro Série A, Brazil, Football News, South America Comments Off on Flamengo edge closer to the Copa do Brasil round of 16 – Sambafoot

An early goal granted Flamengo a narrow 1-0 victory over Coritiba on Thursday, at the Couto Pereira stadium. Rubro-Negro can now afford to draw at Maracana and still qualify for the Copa do Brasil round […]