Everton manager Frank Lampard has claimed Virgil van Dijk ought to have been sent off during Saturday’s goalless Merseyside derby at Goodison Park.

Liverpool hit the woodwork three times and Everton once but both sides had to settle for a point from a sometimes feisty stalemate.

Van Dijk was cautioned by referee Anthony Taylor after a late challenge on Amadou Onana, catching the midfielder on the foot with his studs.

When asked if he felt Van Dijk’s foot was high on Onana, Lampard responded: “Absolutely. I’ve heard a lot this week insinuating my players were time wasting at the game at Leeds.

“There were some things said last season that were negative about my players and decisions we got the wrong end of. I love Virgil van Dijk. As a player he’s fantastic, sometimes you mis-time tackles and they are bad. If you look at the moment he connects with Amadou up on his shin and Amadou’s foot is on the ground, then I’m surprised it’s not gone to VAR.

“The referee hasn’t gone to look at it and hasn’t had the chance to make the correct decision. For me, it was a red card and of course that changes the face of the last 20 minutes or so.

“I just feel the referee got that one wrong.”

‘Pickford showed why he’s England’s No 1’

Tom Davies found the outside of a post for Everton midway through the first half before Jordan Pickford pushed a Darwin Nunez shot onto the crossbar and Luis Diaz hit the frame with a follow-up effort. Then in stoppage time Pickford made a superb save to push Mo Salah’s shot onto the upright.

Conor Coady had the ball in the net in the 70th minute but when his goal was chalked off by VAR for an offside there were ugly scenes as a bottle appeared to be thrown, narrowly missing Jurgen Klopp, while another fan ran onto the pitch from the Gwladys Street End to confront referee Taylor.

But the day belonged to the goalkeepers, with both Pickford and Alisson Becker making fine saves in the second half. Pickford made eight saves in this match, his most in a Premier League fixture in which he did not concede.

Please use Chrome browser for a more accessible video player 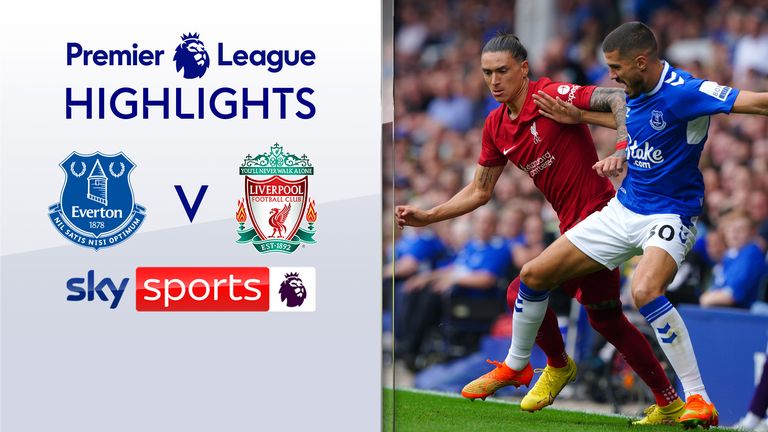 FREE TO WATCH: Highlights from Everton’s draw against Liverpool.


Lampard was delighted with Pickford’s display, adding: “He was absolutely superb – especially the save in the first half from Darwin Nunez. We had been as comfortable as you could possibly be against Liverpool up to that point in the first half.

“He gets his fingertips to that and then in the second half he makes a string of saves that were of a world-class level. He did it for us in the back end of last season. He gets scrutiny because he’s England’s number one and I understand that.

“But when you deliver like he did today, everyone understands why he’s England’s number one and why we appreciate him so much here.”

Everton have now failed to win any of their first six matches of a Premier League season for only a third time, also doing so in 1994/95 and 2010/11 – but the outlook is a lot more positive following their latest draw, their fourth in succession.

Lampard said: “I thought it was a great game and a great performance. Full of intensity and quality. I’m really proud of the players as Liverpool are a top team. They’ve got great players. From moments where you feel you’re doing OK, they can make you feel not OK very quickly. I’m happy with the point. I thought it was an outstanding 0-0.

“We had to suffer in moments at the start of the second half but we flipped it. For the second time in a week, we end up a few centimetres away from three points. If we keep performing around the level that we did today, and get better, I feel those wins will come.”

Klopp: If you can’t win, you mustn’t lose derbies

The result kept Everton winless to start the Premier League season though they were probably happier with the result than Liverpool, who are still yet to win away this campaign and have already dropped nine points from their opening six games.

Klopp said: “Rule number one: if you cannot win the derby, you don’t lose it. We could’ve won it today but we could’ve lost it in a few moments as well.

“If you count the number of chances we had and the chances they had, then we may have been the deserved winner. We had the last chance which was a massive one so we could absolutely have won but Ali had to make two incredible saves and they had a goal disallowed by a small offside.

“It was intense, like always, and we were ready to fight after a super intense game on Wednesday [against Newcastle]. We tried to fight and in the second half it was an end-to-end game. We had to dig in deep.”

Klopp confirmed that Fabio Carvalho sustained a knock to his quad which contributed to his decision to bring Roberto Firmino on at half-time.

“We have to get through this period, that’s how it is,” Klopp added. “We have players coming back but they must be re-integrated. We’re looking at how we can become more dynamic.

“There’s a stop-start integration with Darwin [Nunez] when he was suspended and then we played all the time so we didn’t have the sessions.

“It’s completely normal that he will need time to integrate. I know he will score in these moments in the future. It was super intense for him out there today. Bobby [Firmino] came in and played really well for three games, but having played three times in quick succession that’s why we selected him from the start.

“Everton are a different team to last year. They defend very well. There are not a lot of derbies I’d look back in the future as they’ve typically not been good games of football. There was a big fight, we didn’t always play well but created enough.

“In the end, we couldn’t score but if you can’t win the derby you make sure you don’t lose it.”

Liverpool’s next outing is on Wednesday, when they travel to Italy to take on Napoli in their opening Champions League game, with kick-off at 8pm.

Jurgen Klopp’s side are then back in Premier League action on Saturday September 10 when Wolves visit Anfield, with kick-off at 3pm.