The Brazilian attacker has become one of the most exciting attacking players in the league of late, and his performances have drawn interest from a number of Europe’s elite.

And according to The Telegraph, the Gunners have thrown their name into contention, with Barcelona’s financial difficulties potentially opening the door for Mikel Arteta’s side.

Raphinha has 17 goals and 12 assists for Leeds since joining from Rennes for £16.74million

The Brazilian winger, who can play on either flank with devastating impact, had been poised to move to Barca this summer.

But Leeds Boss Jesse Marsch said last month that the Brazilian remains committed to the club and said his crucial performances throughout the season were emblematic of that.

He said: ‘He is 100 per cent invested. His emotion, which has been talked about, can be interpreted as lack of discipline.

‘I see it as total investment. That part has been no thought for me.’ 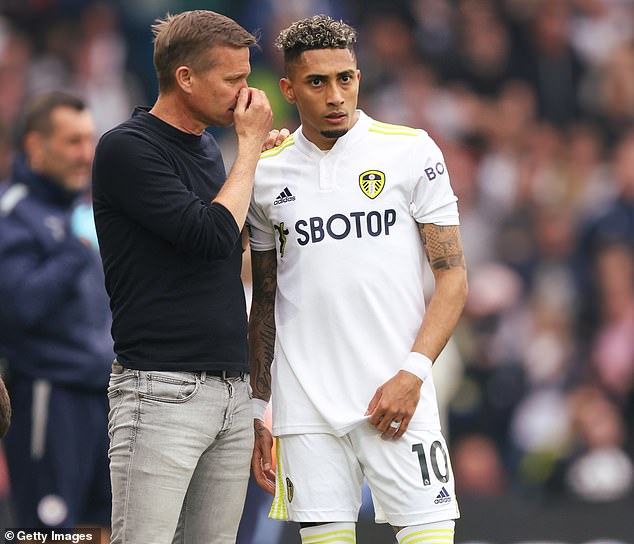 Following Leeds’ dramatic survival from Premier League relegation, it is believed that the west Yorkshire side’s valuation of the player is believed to have increased to £55 million.

And with Mikel Arteta guiding his side back to the Europa League for the first time since 2019/20, the Gunners will want to improve their squad depth to counter the increased fixture schedule.

Raphinha could add to a growing Brazilian contingent at the Emirates, joining the likes of Gabriel Magalhaes and Gabriel Martinelli in north London. 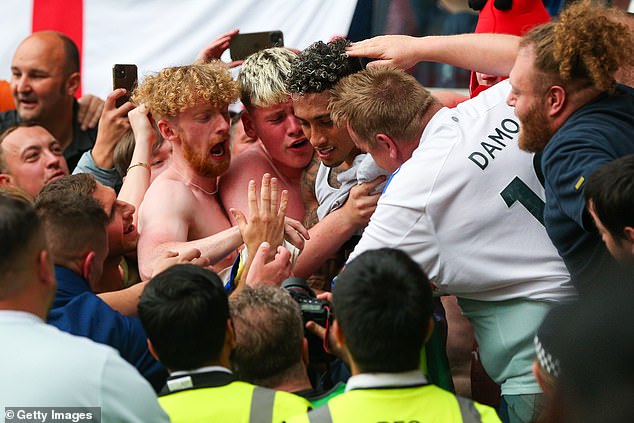 The Brazilian, who has played nine games for his country, is a fan favourite at Elland Road

Arsenal’s technical director, former Brazilian international Edu, has proven his ability to unearth talents from the Brazilian market, such as Martinelli and 19-year-old winger Marquinhos who is set to join the club.

Raphinha could join up with his national team-mate, and Manchester City star, Gabriel Jesus and Leicester City’s Belgian midfielder Youri Tielemans, who have both been strongly linked with a move this summer.

But the Gunners may struggle to put together a bid close to Leeds’ valuation of Raphinha if they are to add him to their ranks alongside their current targets, without first moving players on from the Emirates.

One player rumoured to be on his way out of the club is record signing Ivory Coast forward Nicolas Pepe, who has had a torrid time at the Gunners since arriving for £72m from Lille in August 2019.

Since joining the north London side Pepe has managed only 27 goals and 21 assists in 112 games for the club as he has failed to live up to the expectation his mammoth transfer fee brought with it.

As well as LaLiga giants Barca, Liverpool are proposing a player plus-cash-deal including Takumi Minamino, and West Ham are rumoured to retain an interest in the exciting winger, having had a bid rejected in January.

Getty Images The biggest rivalry in international soccer was set to return for the second time this summer as Brazil hosted Argentina in World Cup qualifying on Sunday, but the game was suspended due to […]

SAO PAULO (AP) — Argentina secured a place in next year’s World Cup after a 0-0 draw against Brazil on Tuesday, giving Lionel Messi his fifth and possibly final shot at winning the only major […]