Following yesterday’s Berlin E-Prix, drivers were back in action in the capital of Germany, albeit on the reverse layout of the Tempelhof circuit. This was not the only change compared to Round 7 of the 2021/2022 ABB FIA Formula E World Championship as the much higher temperatures compared to Saturday have also added another challenge to the race, forcing engineers and drivers to pay great attention to battery temperatures.

Yesterday’s winner Edoardo Mortara mastered the change of direction in the best way, securing the first starting position for the 45-minute race after snatching his first Formula E pole position of his career on Saturday.

However, the star of the start was de Vries, who produced a brilliant getaway and jumped both Mortara and Frijns when they approached Turn 1. At the back end of the grid, former Alfa Romeo Formula One driver Antonio Giovinazzi made a horrible start which saw him drop down to last place.

The first part of the race saw drivers take care of their cars, managing battery temperatures and saving energy in the heat of Berlin. The intensity of the eighth round of the season rose when drivers started to activate their attack mode. Compared to yesterday, there was a significant change as FIA mandeted a long eight-minute attack mode instead of two shorter four-minute power boosts.

Race leader de Vries was among the first to activate his 30kW power boost with Antonio Felix da Costa, Andre Lotterer and Stoffel Vandoorne following him. The Dutchman lost the lead and dropped back to third place, but managed to fight his way back to the front thanks to the higher power mode.

Contact 👀💥@nyckdevries finds his way back to the front of the pack to lead the 2022 Shell Recharge #BerlinEPrix!

Pole-setter Edoardo Mortara was the last among the top drivers to use his additional power. The Swiss-born driver dropped back to P5 before overtaking Lotterer and Vandoorne to jump to P3.

Mortara continued his march back to the front, overtaking da Costa. His team mate di Grassi managed to slice by the Portuguese racer as well, forming a Venturi second and third place behind de Vries.

On Lap 26, Vandoorne activated his FANBOOST as he attempted an attack on da Costa. The Belgian made the move stick, grabbing fourth place from Season 6 champion.

The final laps of the race saw di Grassi struggle with energy, which forced him to coast more than on the previous laps. His energy-saving mode enabled Vandoorne to close in on the Brazilian for the dying minutes of the E Prix. The Venturi racer was eager to keep his position, fending off a couple of attacks from Vandoorne, but the Mercedes driver jumped di Grassi at Turn 5.

Mahindra’s Oliver Rowland produced a promising race, securing P7 which has been his best place so far this season. While Lotterer was fast in qualifying trim both yesterday and today, his race pace was less brilliant and had to settle for P8.

Double Formula E champion Jean-Eric Vergne dropped back at the start of the race and could only manage a ninth position which saw him slip down in the Drivers’ Championship from P2 to P3. Although he was unbeatable at the Rome double-header event, Jaguar’s Mitch Evens could only salvage a tenth place to secure a single championship point. 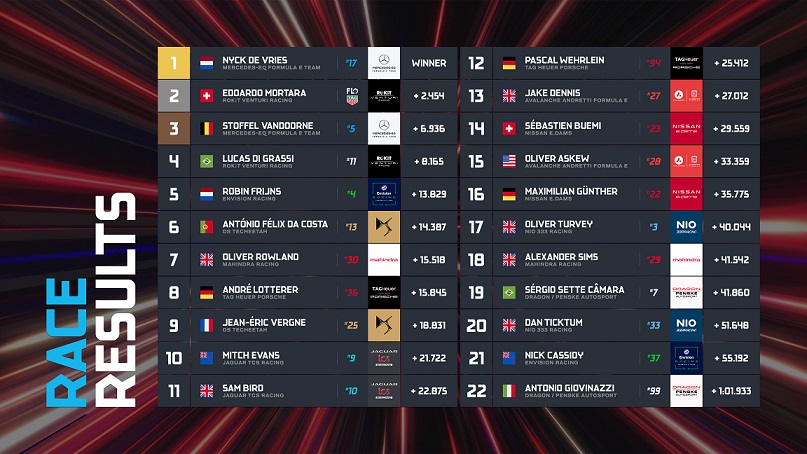 Commenting on the Shell Recharge Berlin E-Prix that was attended by more than 15,000 fans, race winner de Vries commented: “We have had a difficult ride the past three races, honestly I am just very pleased to be back. I have had a bad time in the past three races, so I am very pleased to come back after a difficult day yesterday. My engineer is always really positive which is nice.

“Of course [I was worried about the driver challenges behind], Edo had been very strong all weekend so we definitely had to keep it clean, but the team managed it very well on their side and I executed it. I am very pleased.”

After eight races and at the halfway point in Season 8 of the ABB FIA Formula E World Championship, Mercedes racer Vandoorne is top of the Drivers’ standings running on 111 points, with Mortara moving into second on 99 points and Vergne now third, a further four points back. Mercedes-EQ sit atop the Teams’ standings on 176 points, with ROKiT Venturi Racing next on 148 points.

The ABB FIA Formula E World Championship is now set to make a long trip to Indonesia which will host Round 9, the inaugural Jakarta E-Prix on 4 June.