The second day of the JFA 17th Japan Beach Soccer Tournament was held on Saturday 10 September and the two teams advancing to the final have been decided.

The first quarterfinal match played on pitch A was between Tokyo Verdy and Averdade Kumamoto BS (Kyushu13/Kumamoto), in which Verdy took a two goal lead within the first 10 minutes. However, the Kumamoto side rallied back with five unanswered goals to turn the tables on the three time defending champions.

After conceding the fifth goal in the 26th minute, Verdy went on a goal spree of their own, scoring three goals in three minutes to equalise the match. Despite giving back the lead in the 32nd minute, Verdy added two more goals to their tally in the last three minutes to win the match 7-6. With momentum on their side, Verdy went onto defeat Dorsole Yukuhashi (Kyushu2/Fukuoka) 9-1 in the semi-finals to get one step closer to win their fourth consecutive title. 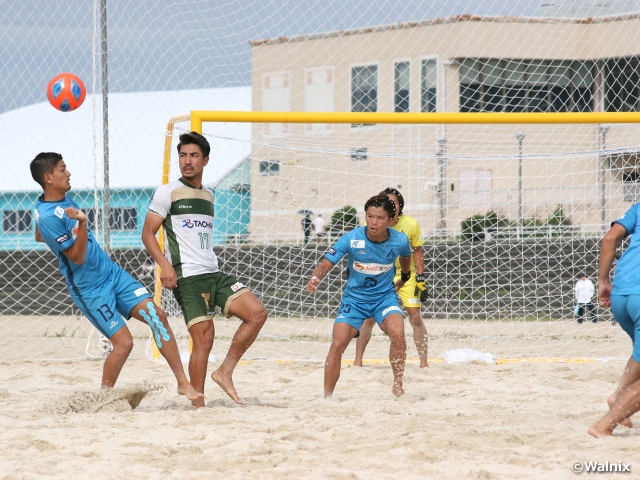 Following their 10-3 victory over Veertien Mie BS (Tokai/Mie) in the quarterfinals, Sol Mar Praia squared off against Loewe Yokohama (Kanto2/Kanagawa) in the semi-finals.

Sol Mar Praia took the lead in the third minute, when their goalkeeper GINOZA Tomoya managed to find the back of the net with a shot taken from distance.

After the two sides exchanged a goal apiece in the 17th minute, Loewe converted back-to-back bicycle shots to equalise and take the lead before the third period.

The Okinawa side showcased their perseverance in the third period, as they score the equaliser in the 32nd minute to send the match into overtime. With both sides failing to score in overtime, the winner was decided by a shootout, in which Sol Mar Praia came up top, setting up the same final fixture from the previous edition of the tournament. 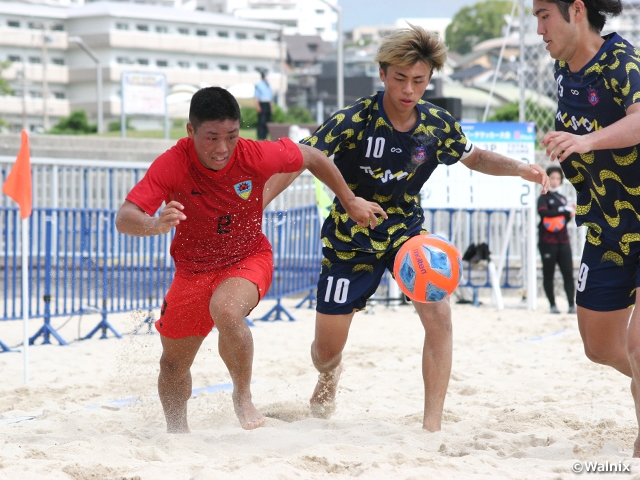 The tournament final will take place on Sunday 11 September to decide the number one beach soccer club in Japan.

MATSUOKA Shota (Averdade Kumamoto BS)
We have played Tokyo Verdy four or five times and lost every time. It feels as if they are a team we must overcome in order to grow as a team. They played with great composure even when trailing behind and showed their competitiveness to come from behind at the end. This team has gotten better each year, but we have not been able to win a national title. We know exactly what we are missing, so we must start over from scratch to become a better team.

YOSHIDA Kyohei (Veertien Mie BS)
We conceded three goals in the first period of the quarterfinals, which allowed our opponents to play with comfort. The way Sol Mar Praia Okinawa managed the game was very effective against us. We stuck with our playing style of utilising combination plays, but that approach backfired. Sol Mar Praia’s coach KAWAHARAZUKA Takeshi has been a key figure in Japanese beach soccer since the early days. It is an honour to play against such person, but we have to fight our way to overcome him. That is the only way to make history for beach soccer in Japan.

HIRATA Masaki (la belle equipe BS)
We fell short from achieving our goal of reaching the semi-finals, but we wanted to finish the tournament on a high note by winning the consolation match. Everyone was on the same page, so we all felt relieved when we won the match. We don’t have a standout player but managed to win with a total team effort. We train everyday for this tournament, so hope to make it back to this stage again.

OGAWA Daisuke (Loewe Yokohama)
We had been eliminated at the semi-finals in the past three tournaments, and here we are once again, eliminated at the semi-finals. Every time we face Sol Mar Praia Okinawa, we are able to possess the ball but couldn’t find ways to score against them. We told each other to play with confidence, and although we were able to take the lead at one point, we weren’t able to overwhelm our opponents today. We were determined to win the title this year, so this is a very disappointing result. The players on this team are getting older, so we have limited time to get back on our feet and try again to become the national champions.