As usual, one of the favourites for a medal at the European Women’s European Championships in Split will be the team of Italy.

The Setterosa arrive in Split after winning 4th place at the World Championships in Budapest, where they lost to the Netherlands in the bronze-medal match.

The Italian women’s national team  have won the European Championships a record-equalling five times. We spoke with their head coach, Carlo Silipo, and one of their most prolific scorers, Silvia Avegno about their expectations of the Europeans in Croatia.

The head coach of the Setterosa, who has been in the job just over a year, describes his satisfaction with his team’s preparations, even despite a poor performance at the Sardinia Cup, where they beat only Israel:

“During the Sassari tournament, we were in a phase of workload. This should not be an excuse. We made many mistakes, and we are working on these. But the approach to Split is proceeding very well. We are in a second phase of preparation dedicated more to tactics. The girls are very motivated.”

Silipo, an Olympic gold medallist from 1992 as a player, stressed the significance of a 4th place finish at the World Championships in Budapest in his team’s progression:

“The World Championships for this team was the first important event after the pre-Olympic tournament in Trieste. We arrived in Budapest with a partially renewed group and with curiosity, especially mine, to see how we would compete against the best teams in the world.  I can say that I have seen a good reaction and a good game.”

But for all the quality in the Italian squad, the Italian national team is in something of a medal drought. Aside from a silver medal in Gwangju, Italy has not won a medal at a major tournament since 2016. We asked Carlo if he thought the lack of ‘winners’ in the team on the international stage had a negative effect:

“This is another aspect that we are working on with all the staff to mentally motivate the girls to win in every situation during the training sessions. The girls are physically very prepared. They have to learn to have more confidence in themselves. This is a longer road, but we will get there.”

However, Italy’s fifty-year-old coach is confident he can keep a freshness to his team with some squad rotation:

“There will be five or six new players in the team compared to Budapest. We will arrive with a younger group but with excellent prospects.”

Avegno: Medal would be great satisfaction

One of Italy’s most reliable players is their number four, Silvia Avegno. A former captain of the national team, and a lethal goal scorer, Avegno will play a key part in any success Italy will enjoy.

The newly signed player for CN Mataro says that the Italian national team have been training hard ahead of the European Championships, particularly on their attacking play:

“We have done months of intense work to improve and get to the European Championships in the best condition. In less than a week, the European Championship begins, and we are ready to put into practice everything we have worked on. Having played at the Sardinia Cup and in common training against Australia was very important for us. We played a lot and compared ourselves with other teams. We have improved our attack and we are constantly working on this.” 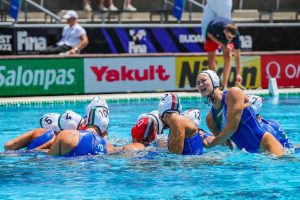 While Avegno’s national team head coach spoke positively about the World Championships in Budapest, the twenty-five year old was more grounded in her reaction to that tournament, once again discussing Italy’s offensive play:

“The fourth place in Budapest left us half-satisfied. The tournament went well, but we still lacked something to go home with a medal around our neck and some more safety. Back home, we started to work immediately on the attack to try to better finalise the shot.”

But irrespective of Italy’s recent performances at major tournaments, which have been somewhat underwhelming for the Setterosa, Avegno maintains that Italy have high hopes for the European Championships in Split:

“Our expectations are certainly those of going to the podium. We girls, together with our staff, have worked hard and changed a lot of things to try to have each one a better version in the game. Going home with a medal would be a great satisfaction.”

But there will be stiff competition for a medal of any colour, particularly from three teams in Silvia’s view:

“I think the most difficult opponents in the European Championship will be Spain, Hungary, and the Netherlands. They are great teams with experience and value.”

Read more about the European Championships