Stefanos Tsitsipas put an emphatic end to a two-match losing streak with a strong opening performance on Wednesday at the Western & Southern Open. The Cincinnati fourth seed rode a dominant serving performance and clean hitting to a 6-3, 6-3 win against Filip Krajinovic to earn his first victory in two events since Wimbledon.

The Greek was downed by Nick Kyrgios in a memorable third-round encounter on the London lawns and fell victim to an upset bid from #NextGenATP Briton Jack Draper last week in Montreal. But after two tough holds to open his Cincinnati campaign, he found a groove on serve and off the ground to power past Krajinovic behind two mid-set breaks.

Tsitsipas scored six love service holds, including each of his final four service games, and dropped just three points on first serve in the one-hour, nine minute match. He finished with a pristine 92 per cent (34/37) win rate on first serve while making 76 per cent of his first deliveries. In a clean match all around, the Greek hit 28 winners (including 14 aces) to just four unforced errors as he outclassed his opponent on Court 3.

The two-time Cincinnati semi-finalist also excelled in the INSIGHTS: Conversion metric, which shows that he won 81 per cent (17/21) of points in which he gained an attacking advantage against Krajinovic. Conversely, he also had a big edge in the Steal metric, winning 29 per cent of points from defence to his opponent’s 19 per cent. 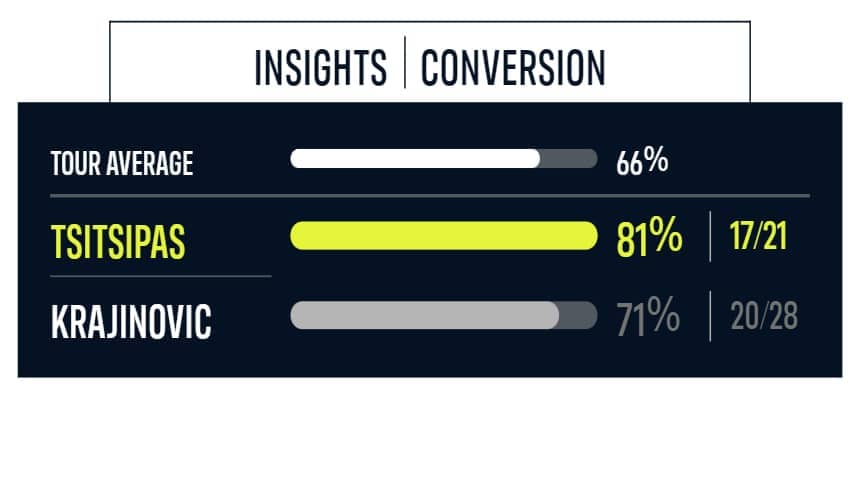