For much of the season, it appeared as if West Coast Fever and Melbourne Vixens were the two teams destined to meet in the grand final. And that is exactly what has happened. But, the path for Vixens has been anything but straightforward. In the preliminary final, they had to survive a heart-stopping encounter with GIANTS Netball, before eventually coming out one-goal winners.

The match was rather chaotic, with first one team dominating, then the other. GIANTS outscored Vixens 40-23 in the second and third quarters, but Vixens had the better of the first and last quarters, winning those by a combined 32-14. So now, Vixens are off to Perth for the grand final next Sunday. They will welcome back Kiera Austin for the match, but will have to improve on their recent form if they are to beat Fever on their home court.

As mentioned on Centre Circle this week, Dr Aaron Fox from Deakin University has been running the statistics on Melbourne Vixens and found that in all games this season where they have recorded 10 or more gains, they have gone on to win – a pretty remarkable and consistent statistic. After Vixens hauled in seven gains in the first quarter and were out by eight goals this would have been enough for many Vixens fans to sit back, relax and enjoy the rest of the game.

GIANTS didn’t get that memo. Vixens were down by 10, but had recorded 11 gains at the start of the fourth quarter – staring down the barrel of ruining this statistical record. But something switched, and they were able to keep that statistical record intact. No doubt Vixens fans will be keeping a close eye on this number as the match unfolds against Fever next week.

Break out performance of the round

After being on the bench for seven matches this year for injured Rahni Samason, Ruby Barkmeyer, found herself replacing Australian Diamond Kiera Austin in the match where Vixens had their season on the line. She made her return to the Super Netball court in one of the most high pressure situations a player could step into.

Barkmeyer entered the match at the start of the fourth quarter, when Vixens were nine goals down, instructed to change the pace in the attacking end and allow Kumwenda to play her more dominant and familiar holding game at goal shooter. While she didn’t do anything flashy, and didn’t put any shots up Barkmeyer was cool, calm and collected under pressure. She found good space, delivered Kumwenda some fine feeds and allowed Rahni Samason the chance to have a breather, look at the game and re-inject herself ready for the final five minutes. 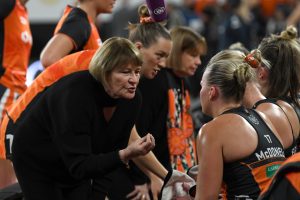 Julie Fitzgerald passing on advice to Tilly McDonnell during a time out. Image Aliesha Vicars

This match started as chaotically as it finished, with the first goal not being scored for 90 seconds after both teams committed early turnovers that would’ve had their coaches worried about how the rest of the game would play out. With each team taking significant leads at various points of the match, Vixens by eight in the second quarter and GIANTS by 10 in the fourth, the fact that the game was decided by a single goal in the end showed the desperation of Vixens to claw back the lead they let slip in the middle of the game.

With Vixens missing their usual starting goal attack Kiera Austin due to COVID protocols, many had written off the minor premiers before the first whistle. Despite Rahni Samason having some strong performances throughout the year, her ability to run out a full 60 minutes at goal attack in a high pressure match was untested. While she faded in and out of the match, under the pressure of April Brandley, she stood up when it counted in the final quarter nailing the two point shot that drew the game level with four minutes remaining. She and Mwai Kumwenda didn’t miss a single shot in the final quarter, allowing them to capitalise on some finals jitters from both Jo Harten and Sophie Dwyer who missed three shots between them.

The game was level, 54 a piece with 40 seconds remaining and Vixens had the ball from their centre pass when an errant pass to circle edge from Mwai Kumwenda was snatched in by Amy Parmenter. GIANTS flew through court, and in desperation Jo Weston was penalised outside the circle leaving Emily Mannix in the defender’s dreaded two on one in the circle. She showed us why Vixens have been one of the top defensive teams of the year, as she flew off Jo Harten to take the intercept from Sophie Dwyer and give Vixens the chance to score off their centre pass and take the lead by a single goal.

Kumwenda didn’t make the same mistake again, taking the sensible one point shot and giving GIANTS only seven seconds to risk the super shot or force the game into extra time. Two long passes into the goal circle saw Dwyer sink a shot from the very edge of the circle, but it was denied by the umpire having been after the whistle. This robbed GIANTS of the chance to avenge their grand final loss from last year and gives Vixens the chance for the ultimate redemption story after finishing wooden spooners in 2021. 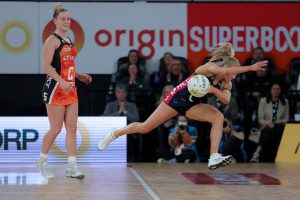 Kate Moloney trying to keep the ball in play, while Jamie-Lee Price watches on. (Photo by: May Bailey | Giants Netball)

Sophie Dwyer and Jo Harten showed glimpses of why they have been one of the most potent attack ends of the 2022 season. Through the second and third quarters they scored a whopping 40 points, including eight super shots using their speed and timing to evade Vixens defenders who had been dominant in the first quarter. The ability to bounce back from their poor first quarter showing was impressive, but some poor decision making, forced by strong defensive pressure saw it all unravel towards the end of the game.

GIANTS brought physicality from the opening whistle, finishing the match with 71 penalties compared to Vixens 56. They had been able to successfully outmuscle Collingwood the week previous, so tried the same tactic against the other Melbourne based team. While initially Vixens enjoyed the freedom of having their opposition out of play regularly, through the middle of the match it started to take a toll as Vixens were forced into more turnovers and they struggled to penetrate through their attacking third to find good feeding position. Strong physical presences from Brandley and Matilda McDonell also confused space in the circle for feeders looking in, often needing to force in a high ball in favour of a safer front option that Vixens attackers struggled to find.

Samason had a strong game for someone with limited minutes for much of the season, generally sitting behind Austin for the position of goal attack. Her individual performance was strong, but her connection with team mates was often lacking. Main feeders Kate Moloney and Liz Watson often found themselves hyperfocused on finding Kumwenda under the post, regularly ignoring strong offers from Samason in favour of a riskier ball to Kumwenda that didn’t always pay off. Moments where a defender was caught penalised outside the circle also caused some trouble, with the shooters not always able to successfully set up screens to take full advantage of the two on one set up they found themselves in. 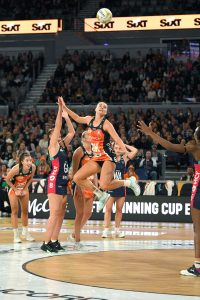 Tilly McDonnell puts pressure over the shot, and watches to see if it lands. Image Aliesha Vicars

Where the match was won and lost?

Neither team will have been happy with the fact that they let their strong lead slip, but the pressure of the super shot proved costly for both teams at different points. Vixens took some long shots early, when they already had a reasonable lead and let the GIANTS back into the contest. This gave the away side a peek back into the game and the team in orange took it and ran, with a whopping 18 goal turnaround in 20 minutes of play. GIANTS then got a touch overconfident in their lead, and made some silly errors, throwing away their 10 goal lead and finding themselves staring down the barrel of being on the wrong side of an epic game.

Turnovers and gains were almost identical, but conversion of centre pass and turnovers at critical moments pushed Vixens over the line. Shooting percentage also played a huge role, with GIANTS showing more finals nerves than their opposition. In particularly early on both Harten and Dwyer found themselves missing goals they would usually be sinking which shook their confidence. Even in scoring one point goals they were low on accuracy, with a combined 34/41 (83%) compared to 49/52 (94%) from Vixens. 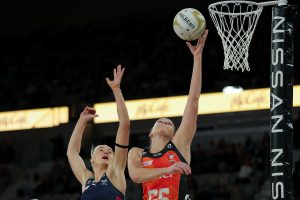 Two sets of Inspector Gadget arms, but Jo Harten comes up with the ball. (Photo by: May Bailey | Giants Netball)

It was a defensive showcase, with 27 gains across the court including five each to Emily Mannix and Amy Parmenter. Mannix had English international Harten rattled from the outset, forcing turnovers and poor percentage shooting in the first quarter that put GIANTS on the backfoot. Her combination with long term circle partner Jo Weston was causing mass confusion for GIANTS attackers, as they gave a masterclass in how to run a split circle, always having both players covered while not getting caught in chase mode.

Weston had all but shut Dwyer out of the game at the end of the first quarter, but Dwyer proved to many why her name was being tossed around for Birmingham selection, dominating the middle two quarters against the seasoned Diamond Weston, before coming down with a case of the yips in the final quarter. Kate Eddy also provided invaluable protection to her circle defenders, with her long arms and tenacity for any loose ball she kept the usually dominant Maddie Hay to  just 13 goals assists and 10 centre pass receives.

Parmenter ensured Eddy wasn’t the only wing defence on people’s minds at the end of the game, doing her best to help GIANTS hold on to their lead as Vixens fought back in the fourth quarter. She well and truly had Liz Watson covered in the first half, recording only nine goal assists in 30 minutes of netball. Parmenter was also able to find space to float off Watson and hunt for intercepts, topping the stats with four. Her amazing performance has got many wondering why she isn’t travelling to Birmingham next month, but she will no doubt get her crack in the green and gold soon. 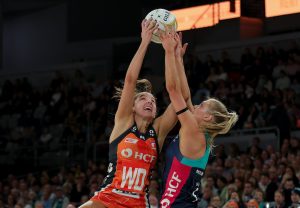 Amy Parmenter was the Giants best, and came up with 5 gains.(Photo by: May Bailey | Giants Netball) 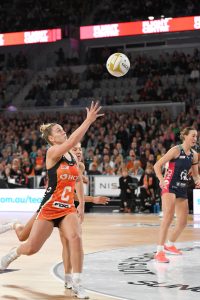 Jamie-Lee Price on the edge of the circle. Image Aliesha Vicars 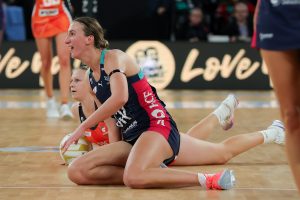 Emily Mannix and Jo Harten waiting for the umpires verdict. (Photo by: May Bailey | Giants Netball) 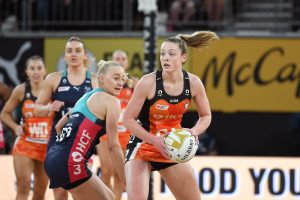