**Keep your eyes on Netball Scoop’s socials, as we bring you a “Behind the Scenes” vlog of each day’s activities, along with ‘Short and Sharp’ on the Reels.**

While there have often been queries over the consistency of Jamaica’s midcourt, they are lighting up the 2022 Commonwealth Games. Remaining focused and consistent, despite some big margins in their favour, Jamaica will be a formidable force come finals.

It was intriguing seeing umpire Gary Burgess put a call out for black duct tape on the eve of the Commonwealth Games. Burgess wasn’t planning on any home renos, but rather the umpire’s outfits needed a little adjustment. On Twitter Gary Burgess and his former elite compatriot, Michelle Phippard, were rightfully critical of the continued use of white skirts and shorts  – one of the alternative strips at these games – for umpires.

And on the topic of umpires, Anso Kemp got a laugh from the crowd, when she said over her mike, “All the players are making fun of me!” In a lovely show of humour, Kemp was referring to the unusually high number of shoes that came off in her end of play, causing her to hold time while adjustments were made.

What is a little more concerning is the limited number of umpires holding time for floors to be wiped dry after a player hits the deck, unless players request it. Sweat on the floor is an occupational health and safety issue for all.

With the 2023 VNSL signing period opening on the 8th August and closing on the 14th of October, and a number of big names departing clubs, rumours are swirling around Birmingham about possible replacements. One of the names on everyone’s lips is Chelsea Pitman, who looks likely to make a return to the court full time in 2023. What fans would love to know, is in what country, and where?

It was procedurally unusual to see Jo Harten approach the umpires at half time of England’s match. While vice-captain of the team, Harten didn’t take the court at all, and neither regular captain Nat Metcalf or on court captain Laura Malcolm were with her when the approach was made.

Paige Hadley (Australia) limped off court in the second quarter. She spent the remainder of the game on the sidelines with ice on her right calf, and looked particularly ginger after the match. It’s an injury that Hadley has been carrying for a while, and is particularly concerning not only for Hadley’s Games experience, but for the rest of the Australian midcourt who will share the extra load.

Zanele Vimbela (South Africa) had a heavy collision with Liz Watson and subbed out of the game, although returned later.

Also concerning was the sight of Phumza Maweni with her calf strapped after what we thought was cramping yesterday. Maweni exited the game in the fourth quarter, looking a bit proppy.

Jo Harten didn’t take the court for England, with coach Jess Thirlby saying that she was being rested ahead of the business end of the tournament.

Takondwa Lwazi (Malawi) was carried off court with a leg injury.

While New Zealand had eight turnovers, seven of them were from Grace Nweke. In an impressive feat, the entire remaining team had just one turnover between them. 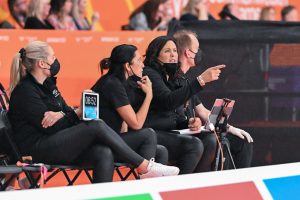 Deb Fuller and Noeline Taurua looking thoughtful on the New Zealand bench. Image Sue McKay/Kick It To Me Photography.

PLAYERS OF THE DAY

Defensive player of the day was Shamera Sterling, who has been a little quieter this tournament so far compared to rising star and teammate, Latanya Wilson. In Sterling’s outing today, she pulled in 15 gains, including 12 intercepts.

Gina Crampton had a strong outing for the Silver Ferns, and in her 45 minutes compiled 24 centre pass receives and 32 feeds, for just one turnover.

Michelle Magee (Northern Ireland) had a tough job, matching up against Eleanor Cardwell, Helen Housby and Sophie Drakeford-Lewis at various times. Despite giving away centimetres to her opposition, Magee helped herself to four gains.

It was a difficult night for Barbados, but Faye Agard showed her versatility, playing two quarters at goal keeper, and two at goal shooter, and recording 10/12 (83%) against the formidable Jamaican defence. 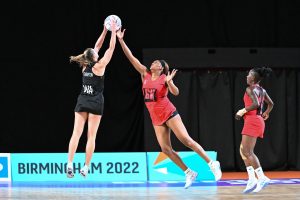 Loreen Ngwira challenges Gina Crampton for the ball. Image Sue McKay/Kick It To Me Photography.

This game provided the first true test for Australia, but they were still able to put out a strong full court performance while rotating their full squad through a variety of positions. South Africa started well, moving the ball quickly through court and applying defensive pressure but a nervous start from Iné-Mari Venter at goal shooter gave Australian defenders plenty of rebound opportunities which their attacking end capitalised on, finishing the game with 74/76 shooting accuracy at 97% accuracy.

South African captain and stalwart Bongiwe Msomi was strong and decisive at both centre and wing attack, demanding the ball, finding circle edge with ease and keeping Ash Brazill unusually quiet compared to her previous form. Hadley was also solid in her time on court, putting on strong defensive pressure while also finding great attacking space without crowding Liz Watson.

Hadley limped off the court with six minutes remaining in the second quarter, leaving many Australian fans nervous with what is reported to be an aggravation of an existing calf injury. Moloney entered the game in her place and the side didn’t miss a beat which is promising, although for the future of the Australian team in the tournament, losing Hadley would be devastating.

Steph Wood came up against three South African defenders, getting the best of them all using her elusiveness and play making ability to find Gretel Bueta with ease. None of the South African defenders had the speed to match her, and even the height of Zanele Vimbela and Nicola Smith weren’t enough to block her vision into the circle. Even former Sunshine Coast Lightning team mate Phumza Maweni didn’t have answers to help her fellow defenders try to quell the impact Wood was having.

As the game blew out of reach, Proteas took the chance to rest big players including Venter, Msomi and Maweni. This opened the chance for less experienced players to get some time against the best in the world, notably Elmere Van der Berg who played a strong part at both goal shooter and goal attack, not shying away from the contest with any of her opponents.

In their toughest game yet, Australia had some impressive statistics including 100% shooting accuracy in the first half, and low turnovers – with just five in the first three quarters of the match. The majority of combinations gelled, with the exception of Bueta and Kiera Austin in the circle. Austin was often caught standing still waiting for Bueta to make a move, rather than taking her own cuts and drives to create space for herself.

She appeared happy to let Bueta run the show, which she is more than capable of doing, but Austin also has the capacity to be a game changer when she injects herself to the game. She combined much better with Cara Koenen in the final quarter, suggesting she may perform better with a traditional goal shooter.

Overall, South Africa struggled to find their rhythm and showed the depth of players they are missing throughout the court either through injury, retirement or pregnancy. As we have come to expect from the Proteas there were moments of brilliance, with strong defensive gains followed by efficient through court transition and accurate goal scoring. But their ability to maintain this for 60 minutes against top sides has dropped, and is something they will be looking to regain if they are hoping to challenge for medals at future major tournaments.

Jamaica continue to look strong at the Commonwealth Games, recording the first 100+ goal game of the tournament. Shimona Nelson started at goal shooter, starring under the post with 58/60 at 97%. Jhaniele Fowler was rested for the first three quarters, while Jodi-Ann Ward didn’t take the court at all.

The Sunshine Girls used a different back three again, with Kadie-Ann Dehaney (GK), Shamera Sterling (GD) and Latanya Wilson (WD) running out the full game. It was a formidable combination, with the trio combining for 24 gains.

Coach Connie Francis said after the match that turnovers are still an area for the team to work on, and of their 17 for the match, most of them were committed by Nelson, or the attacking midcourt.

It was a tough and error-ridden outing for Barbados, although they should be pleased with their third quarter. They scored their most goals of the match, with eight, and held Jamaica to 22.

Determined to go through pool play undefeated, England produced some slick attacking moves to start their match against Northern Ireland. The ball movement was swift, while triangular play around the circle set the shooters up under the post. With her knee untaped, Jo Harten warmed the bench, and didn’t take the court at any point, leaving Eleanor Cardwell (GS) and Helen Housby (GA) to start. Housby answered recent critics with incisive movement around the circle, and an accurate 8/8 for the quarter.

England’s defensive pressure was immense, forcing Northern Ireland into lateral movement and a number of errors throughout court. The physical presence of Eboni Usoro-Brown (GK) and Stacey Francis-Bayman caused some hesitation passing into the circle, impacting Ciara Crosbie’s and Emma Magee’s accuracy at times.

Sophie Drakeford-Lewis shuffled forwards into goal attack as the second quarter started, while on court captain Laura Malcolm moved to wing attack. Her Manchester Thunder connection with Cardwell was clear, albeit with some risky long and high passes, rather than the crisper work of the first quarter.

Caroline O’Hanlon’s ball speed and movement was impressive. The Warriors captain was again their best, with 22 feeds and three gains, while Michelle Magee battled hard in defence.

England was relatively consistent across the match, despite using numerous combinations as players were rotated. 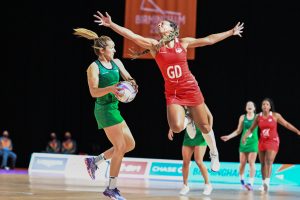 Stacey Francis-Bayman attempts to intercepts a pass headed for Caroline O’Hanlon. Image Sue McKay/Kick It To Me Photography. 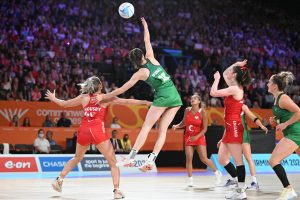 Olivia McDonald gets airborne for Northern Ireland. Image Sue McKay/Kick It To Me Photography. 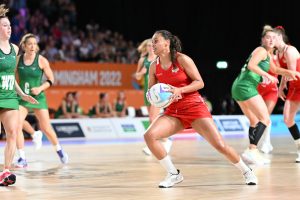 Laura Malcolm was used at both wing attack and wing defence. Image Sue McKay/Kick It To Me Photography.

After losing to Malawi at the 2018 Commonwealth Games, tonight’s match against the African nation was another strong test for New Zealand. Despite limited court play since the pandemic began, Malawi were impressive early with crisp ball movement through court. Perhaps the best equipped nation to deal with the Silver Fern zone, Malawi’s possession based netball saw them patiently move the ball through court, until they spotted an opening in the circle.

As a result, they stayed in touch with their opponents, and it was only a few ball handling errors on the centre pass, and New Zealand’s get out of jail option to Grace Nweke, that separated the two teams in the first half.

It was Mwai Kumwenda’s best outing at the tournament so far, shooting 27/31 at 87%, while the ball of the day was thrown by Takondwa Lwazi, through a stunning zone, to Kumwenda under the post.

For New Zealand, Kelly Jury was again in excellent form and returned five gains, while coach Noeline Taurua put one of her tallest defensive lines out on court, potentially in preparation for the business end of proceedings.

Grace Nweke was again the focal point in the shooting circle, putting up 52 of New Zealand’s 69 goals. Her teammates worked the ball patiently in to her during the first half, before opening their shoulders and putting up the high ball more often, as the match progressed.

With Nweke used so heavily to date, it presents an interesting question – she’s gaining international match practice before facing sterner opposition in the days ahead. But if she falters or is injured, has Maia Wilson had enough court time with her feeders to feel comfortable? 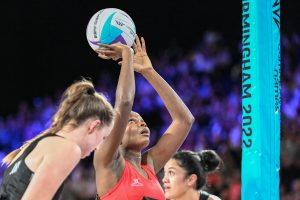 Check out all the scores, stats and points tables on our Draw & Results page.