Today was the last day of judo in the European Youth Olympic Festival 2022, closing off an incredible tournament with the exciting Mixed Teams event. Getting started in the final block, the teams of Georgia and Israel took the bronze medals and left Azerbaijan and Ukraine to battle it out for gold. 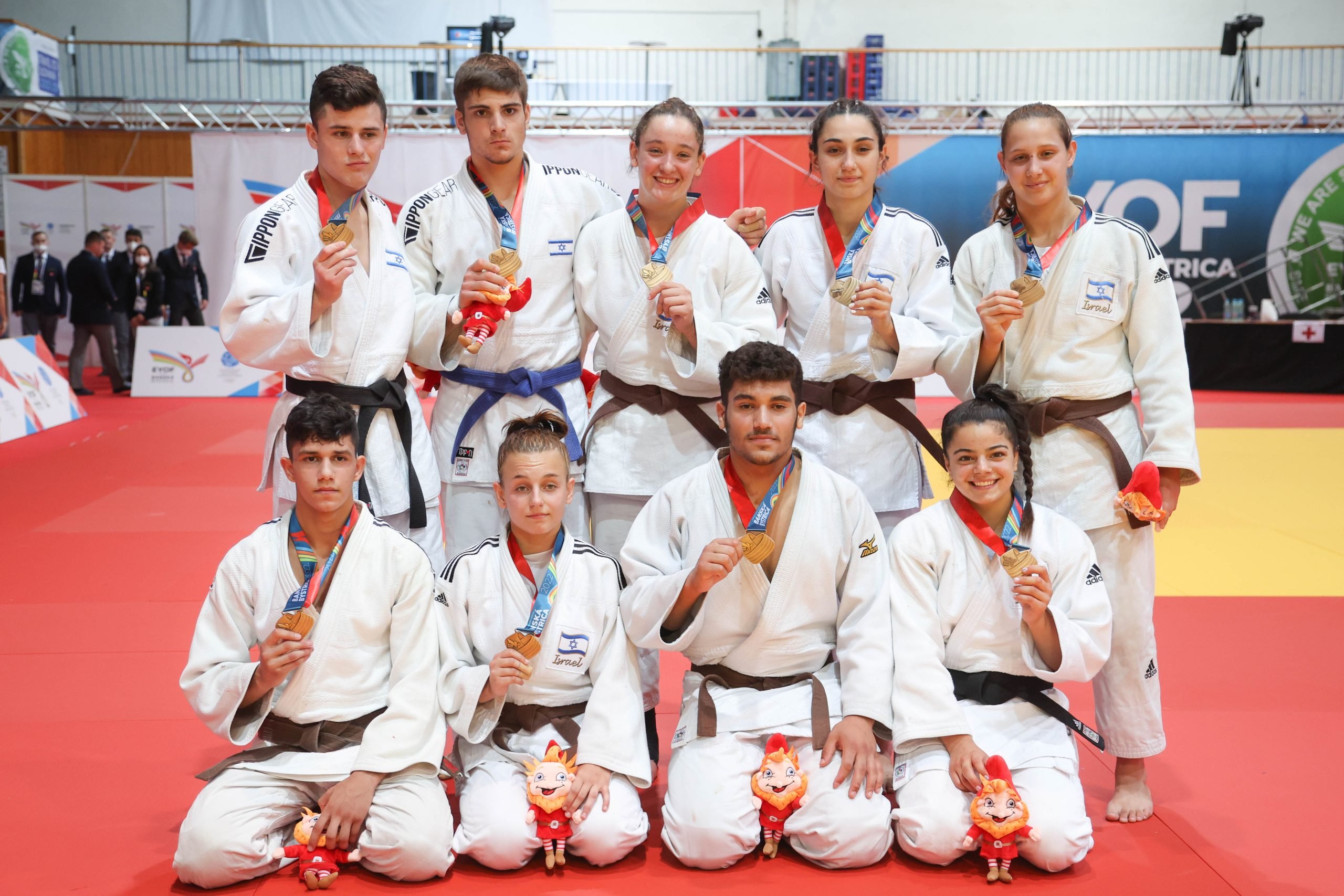 The teams approached the tatami, the atmosphere sensational. First up was Kanan NASIBOV (AZE) against Fedir YAROSHENKO (UKR). Nasibov was the number one seed in the heavyweight division but finished with an individual bronze so his determination to take the gold today was great. In the end it was a ne waza win for him and he set the precedent for this final.

Aydan VALIYEVA (AZE) was the former cadet European champion, and took silver this year in the -48kg category, but for EYOF competed at -52kg. A change in direction and a sasai tsuri komi ashi against Tetiana LIMZAIEVA (UKR) ended the contest in the first half, and allowed team Azerbaijan to celebrate their second win.

Two of the -60kg medallists; Nurlan KARIMLI (AZE) and Nazar VISKOV (UKR) went head to head in the -66kg division of the team event. Both avoiding danger, they managed to pick up penalties, but the momentum of the Azerbaijani’s was too strong, Viskov tried to get back to his feet and Karimli took advantage with an o soto gari to score the ippon, making the score 3-0.

The -57kg EYOF champion Fidan ALIZADA (AZE) was the first deciding point, going in there was pressure to take the fourth win for the team gold medal. The tension was clear and the contest intense, both athletes picked up waza ari scores as well as a shido going in to the final minute. After a mere 15 seconds, a colossal pick up from Alizada scored a second wazari and sealed the team title with a clean 4-0 win. A champion finish.

Azerbaijan coach and 2013 world champion, Elkhan MAMMADOV was proud of his team and their golden accomplishment today,

I am so happy for this team and their result, it is a great feeling to see them win. This is a strong group who have all taken national titles in Azerbaijan which was the selection criteria. They were really motivated after such a long time out of competition and have been good this year. I want to say how great this event has been for these athletes so a big thank you to the EYOF organisers and the EJU.

Equally as proud was the Ukranian coach, Anna KASHTANOVA,

It was such a good competition, they have done really great, also in the individuals, we took three gold and two bronze medals. The athletes have been training in Slovenia, Spain and Romania as well as Ukraine still and we are proud to show how strong the team is in spite of the difficulties we face. We are really grateful to the National Olympic Committee of Slovakia, that we were invited to a training camp near Bratislava, they really helped us a lot to make this a reality.