Gemma Lewis has been appointed the franchise’s first ever head coach with Natalie Lawrence serving as her assistant coach.  They are the second all-female coaching staff in the A-League Women’s alongside Canberra United.  At present three other head coaches are also women.

During the announcement of their new positions, Lewis and Lawrence expressed their excitement about having the chance to be the first professional club coaches in New Zealand’s women’s football history.

“It is pretty amazing to do something to be able to create a bit of history,” said Lewis.

“To have it be something that is a first time for New Zealand and to be on that journey along with players, and things like that as well, it is something that makes it all the more special and important.

“I could not have really written the story better if I tried.  I am pretty excited about it.

“It does definitely means a lot.”

“This has been many many years in the making.

“Having been involved with football in New Zealand for a number of years this is definitely icing on top of the cake from many years of hard work through ourselves, the players, New Zealand Football and the Phoenix.

“It is really really exciting.  It is an honour to be part of something that is quite historical.

“I personally cannot wait to get onto the field and get started.”

Both women are well known in Kiwi football. They each have extensive coaching experience in New Zealand, having both progressed through the New Zealand Football pathways and coached in the National Women’s League.

The two coaches are also familiar with each other.  Lewis is currently the head coach of the women’s U-20 New Zealand Football team with Lawrence serving as her assistant coach in that national team set up.  They will continue their current roles with the Young Ferns remotely while coaching with the Phoenix.

“We are pretty collaborative in terms of our approach,” said Lewis with regards to her partnership with Lawrence and coaching style.

“I know there is always head coach and assistant coach roles but even as a team, as a staff, it is how I like to work.  To be open and collaborative with our processes.

“I personally feel like, and this is just my personal opinion, if you are in a staff where you can bring opinions to the table, they can challenge, they can work with you in that sense, it means we cover the best bases and the most information we can when it comes to preparing for teams, when it comes to creating an environment that players really want to be a part of.

“That is how we are going to continue to operate.”

“We have worked together now for a number of years really closely.

“An assistant role is something that I thoroughly enjoy,” Lawrence added.

“That is where we really compliment each other on and off the field.”

Given the short period of time that the two coaches will have in preparing their brand new team for the upcoming season, this pre-existing partnership should help with the formation and direction of the Phoenix.

The coaches will also continue with the playing style they have previously used in their teams.  This should be one familiar to potential Phoenix Kiwi players who have evolved through the New Zealand Football system.

“We definitely kinda are comfortable with the style of play that we are approaching,” said Lewis.

“It does fall under and align with New Zealand Football and the Phoenix.

“For us it is about creating players for the future and developing them to have a longer term with the Phoenix and to step up onto the Ferns or the Matildas.

“We are definitely aligned when it comes to that playing style.

“Players who have been in New Zealand for a long period of time have been operating under these styles of play for a while now.”

The playing style is not the only feature that will be uniquely from New Zealand at the new Wellington franchise.  Lewis discussed the approach that both coaches will be instituting to ensure that the Phoenix are a Kiwi team in the Australian A-League.

“For us it is going to be more about that culture, not just the playing style, not just what happens on the field.

“For most New Zealand teams you harness that strength that some countries cannot necessarily tap into.

“That unspoken way, that Kiwi strength side of things.

“We’re wanting to really work on that side of things and not necessarily just the X’s and O’s or the playing style and what we want to do on the field, but also bringing it all together.

“Creating that environment where it is a really enticing team that people want to be a part of.”

While Lewis and Lawrence were both signed for 2021-22 coaching contracts with the Phoenix, they both stated their desire to remain in their new position in the longer term.  For now they have one year to put their stamp on the new team and the newly renamed A-league Women.

The Matildas squad have responded to Lisa De Vanna’s statement regarding allegations of “Toxic Culture.” 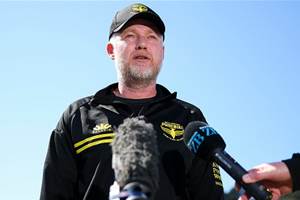 The Wellington Phoenix is expecting to make more announcements with regards to player signings later this week.  Their first four round schedule can be found using the following link.