Manchester United take on Southampton in a lunch-time kickoff at the St Mary’s Stadium on Saturday hoping to make it two wins on the bounce in the Premier League.

Erik ten Hag got his first win as a Manchester United boss on Monday as his side produced an impressive display to beat arch-rivals Liverpool 2-1 at Old Trafford. Jadon Sancho and Marcus Rashford scored the goals for the Red Devils, who bounced back emphatically after the Brentford debacle last weekend.

The win over Liverpool should have given Man United much-needed confidence, and Ten Hag will hope his boys back it up with another three points against Southampton.

Anthony Martial provided Erik ten Hag with a timely injury boost by returning to the squad against Liverpool. The French forward came on as a second-half substitute on Monday and bagged the assist for Rashford’s goal.

Meanwhile, Casemiro was unveiled at Old Trafford before the Liverpool game, but it remains to be seen whether or not he is registered in time to be in the squad for the trip to Southampton. 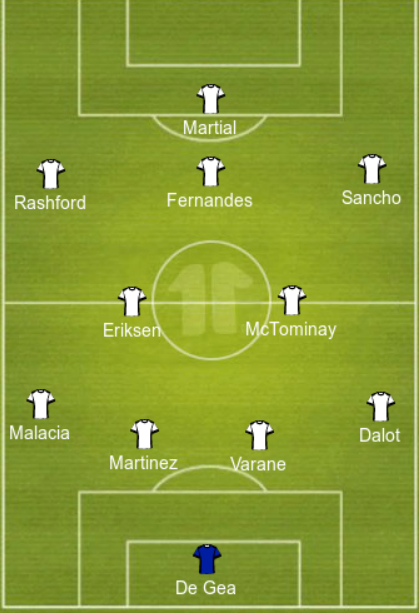 Despite enduring a tough afternoon at Brentford, David de Gea was retained in goal by Ten Hag against Liverpool on Monday. And he repaid his manager’s faith by putting in a solid display, making a couple of crucial saves in United’s 2-1 win. The Spaniard will have taken a lot of confidence home after that performance.

Raphael Varane made his first start of the season against Liverpool and had his best match yet as a Man United player. He looked rock solid alongside Lisandro Martinez in central defence, as the pair along with full-backs Diogo Dalot and Tyrell Malacia kept the front three of Mohamed Salah, Roberto Firmino and Luis Diaz quiet for the majority of the parts of the game.

Ten Hag’s big calls to drop Harry Maguire and Luke Shaw from the first XI paid off and he is likely to stick with the same back four against Southampton at the weekend.

In midfield, Scott McTominay is set to keep his place after a decent performance in the last game. He will start next to Christian Eriksen in the double pivot hoping to control the tempo of the match at the St Mary’s Stadium.

Bruno Fernandes led his troops so well against Jurgen Klopp’s side, showing great energy and commitment throughout 90 minutes. He is a certainty to start in the No.10 role.

With Anthony Martial back to full fitness and making an impact in United’s last fixture, the Frenchman will be expected to lead the attack at Southampton. Marcus Rashford and Jadon Sancho will retain their places on the flanks, meaning Cristiano Ronaldo will once again start on the bench.

I am Rohan Sengupta from one of the busiest cities in India, Mumbai. A Journalism graduate with a keen interest in sports, football is something I simply cannot live without and writing, discussing and analyzing the game is what I do 24*7.

Southampton moving for Johnstone is a no-brainer

[ad_1] Southampton moving for West Brom goalkeeper Sam Johnstone next year is a “no-brainer”, says former Premier League midfielder Carlton Palmer, who played for both clubs.According to The Athletic, Johnstone is high on Southampton’s shortlist […]

[ad_1]Photo by VINCENZO PINTO/AFP via Getty ImagesSouthampton are planning to make a bid for Celtic striker Odsonne Edouard to replace Danny Ings, according to The Scottish Sun.What’s the story?The Scottish Sun are reporting tonight (10:30pm) […]

[ad_1]Aston Villa made it two wins from two Premier League matches as they brushed an in-form Southampton team to one side in a 4-0 victory at Villa Park.Not many expected changes but Steven Gerrard was […]