Jack Grealish has become the most expensive Premier League transfer signing in history, following completion of his £100m move from Aston Villa to Manchester City.

Grealish has signed a six-year contract at City until June 2027 after impressing at Aston Villa where he scored 32 goals in 213 appearances across all competitions, whilst establishing himself as an England international in the last 12 months with 12 appearances and featured at Euro 2020.

This £100m deal will make Grealish the record most expensive incoming English transfer in history, bettering the £89m fee that Manchester United paid Juventus in July 2016 for Paul Pogba.

Speaking about his move to Man City, Grealish admitted to feeling “incredibly happy” to have completed the switch from Villa, hailing City as “the best team in the country with a manager considered to be the best in the world – it’s a dream come true to be part of this club.”

Grealish also praised the club’s consistency in winning major trophies and applauded Pep Guardiola for helping the club move up “to the next level” with some of “the most exciting” football styles in European football.

On the prospect of playing under Guardiola, Grealish said: “To play for Pep and learn from him is going to be special and it’s something any top footballer would want.

“The facilities are amazing, and I honestly can’t wait to get started, meet everyone and get playing.”

City’s Director of Football, Txiki Begiristain added that the club are “absolutely delighted” to secure Grealish, describing the 25 year-old as “an incredible talent.”

Begiristain also spoke highly of Grealish’s development in recent seasons at Villa and as part of England, saying: “His natural talent together with his commitment to improve as a player, has seen him become one of the most exciting attacking players in world football today.”

The 56 year-old added that he believes that Guardiola’s style of play for City and Grealish’s style are well matched, adding: “Pep loves the way he plays, and we all feel he is an ideal fit for Manchester City. Our style and his style are a perfect match.”

Grealish meanwhile tweeted a farewell message to Villa supporters after having spent 19 years as part of the club, having graduated through their academy into the senior team.

How Could Man City Line Up This Season?

With Grealish primarily playing as a left-winger but also capable of playing in central midfield or as a number 10, Guardiola certainly has plenty of tactical decisions to make this season concerning his line-up.

Ederson however should remain as first-choice goalkeeper with Kyle Walker, John Stones, Ruben Dias and Joao Cancelo in defence. with Ilkay Gundogan and Kevin De Bruyne in central midfield if opt for a 4-2-3-1 formation.

Riyad Mahrez has enjoyed a strong pre-season so expect to see him on right-wing which would leave Guardiola with a tricky decision because he could keep Raheem Sterling on left-wing with Grealish slotting into the central attacking midfielder (CAM) role.

Grealish though as already said is primarily a left-winger so will instinctively drift to the left more and leave the right side slightly exposed, which could make Guardiola consider placing Sterling in the CAM position as a false nine behind Gabriel Jesus who will be the lone striker up front. 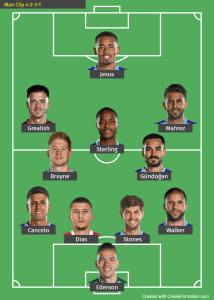 Should Guardiola however opt to switch to a 4-3-3 formation then expect defence to stay the same but midfield could play like an upside-down equilateral triangle, with De Bruyne in centre and Bernardo Silva out towards the right and Phil Foden on the left wing.

That would leave Grealish and Sterling able to play up front with Sterling moving across into the striker role as a false nine, which would enable Grealish to play as a left forward with Mahrez deployed as a wide-right forward. 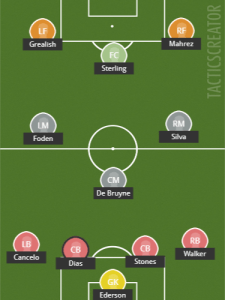 Photo by Mike Hewitt/Getty ImagesAccording to Goal, Aston Villa are pursuing the signature of Chelsea youngster Valentino Livramento this summer, but face a battle with AC Milan.Chelsea are pushing for the signing of Inter Milan […]

Steven Gerrard made just the one change ahead of the trip to Newcastle United today as the suspended Ezri Konsa was replaced by Calum Chambers, who made his starting debut in a Villa shirt.Although Villa’s […]

Photo by Mike Hewitt/Getty ImagesAston Villa are facing competition from Premier League rivals Southampton and Brighton to sign Chelsea wonderkid Tino Livramento, as reported by Goal. Is history about to repeat itself at Stamford Bridge? On the […]