MANCHESTER UNITED are reportedly stepping up their interest in Lazio star Sergej Milinkovic-Savic.

That’s after seeing a move for Adrien Rabiot fall through over wage demands.

United’s lack of options in the middle were brutally exposed in defeats to Brighton and Brentford.

And Ten Hag hoped his problems would be solved by the capture of Juventus ace Rabiot.

However, a deal has now collapsed after the Frenchman demanded astronomical wages. 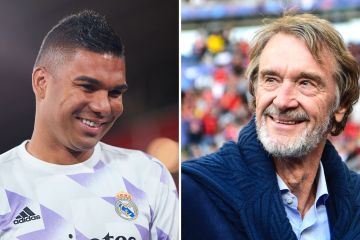 And Foot Mercato claims United have now turned to Milinkovic-Savic.

The powerful Serbia international has long been linked with a Premier League move.

Lazio are apparently open to selling for the right price.

And United have now made contact with Milinkovic-Savic’s agent to get more info over fees and contract demands.

But there are plenty of other stars on Ten Hag’s radar.

It’s believed the Red Devils have made a cheeky approach for Real Madrid icon Casemiro, a FIVE-time Champions League winner.

Brighton ace Moises Caicedo is also of interest to United.

That’s after the Red Devils REJECTED the chance to sign him on the cheap just six months ago.

Liverpool are also keen but Brighton have no intention of selling.

Lazio and Empoli play out thriller

[ad_1]Lazio drew 3-3 against Empoli at the Stadio Olimpico in the first Serie A round of the 2022 on Thursday afternoon.Goals from Ciro Immobile and Sergej Milinkovic-Savic to claw back a two-goal deficit gave Lazio […]

Milinkovic-Savic: Lazio wanted to win, Galatasaray made a wall

[ad_1]Lazio star Sergej Milinkovic-Savic lamented the defensive tactics of Galatasaray in their 0-0 draw in the Europa League on Thursday evening.The Biancocelesti finished three points behind the Turkish giants in Group E whereas the club […]