Man United, Liverpool and Spurs all set to watch PSV winger and England U21 star Noni Madueke TONIGHT… with £34m-rated star’s future up in the air ahead of Champions League play-off

By Adrian Kajumba For Mailonline

With one week of the transfer window left, the eyes of a number of clubs from the Premier League and beyond will be on PSV’s Champions League clash with Benfica tonight.

One of the focuses of their attention, and central to PSV’s hopes of progressing, will be rapidly-rising England Under 21 winger Noni Madueke.

And the outcome of the second leg could help determine whether the 19-year-old’s future remains a situation to watch and whether there is a chance of prising him away between now and next Tuesday’s deadline. 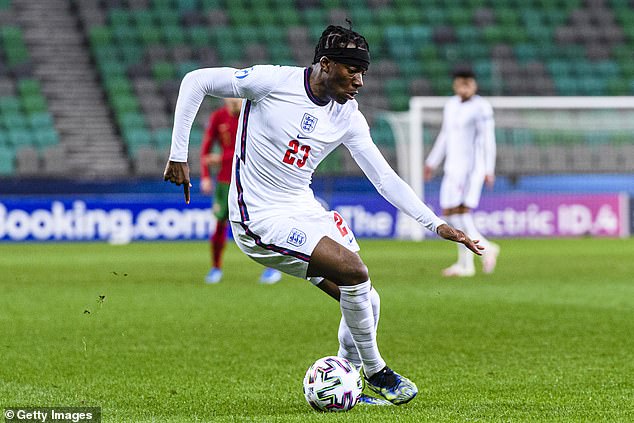 The 19-year-old, who started out at Tottenham, has represented England at Under 21 level

It will be no surprise if the number of talent spotters is similar, if not higher, at the Philips Stadion.

Madueke’s former club Tottenham plus long-term admirers Manchester United and Leicester were among the clubs who had scouts in the first-leg crowd.

Liverpool, Wolves, Bayer Leverkusen and Borussia Dortmund have also all been credited with interest in the Barnet-born teenager. And with good reason.

Madueke, considered one of the best English players of his age, left Spurs for PSV in June 2018 aged 16.

He made his first-team debut the following season after progressing quickly through their youth setup and displayed his impressive ability to impact games in minimal time during his first full campaign at senior level last term. 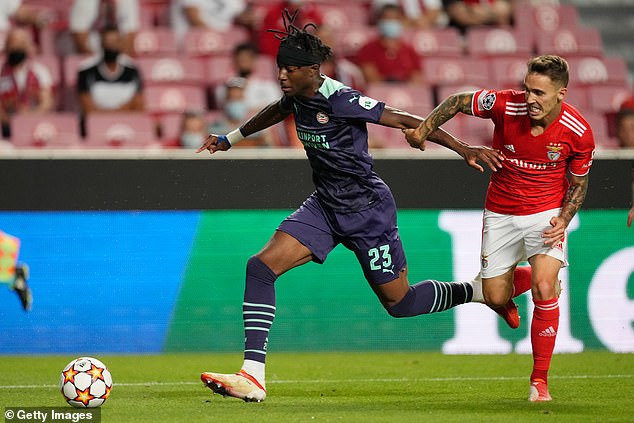 Madueke, considered one of the best English players of his age, left Spurs for PSV aged 16

Madueke scored nine goals and added eight assists in 32 appearances. Only 11 of them were starts making him statistically one of the best performing English players in Europe.

Now Madueke has gone into overdrive. The balance of starts to substitute appearances has swung the other way confirming his growing importance and development with Madueke starting seven of PSV’s eight games so far this season.

In line with his increased involvement his productivity has gone up another level. Madueke has scored six goals and set up one more in a blistering start to the new campaign.

His form has helped PSV make a perfect start to their Eredivisie season and kept their hopes of a return to the Champions League group stage for the first time since 2018 alive.

But they might also have a dilemma on their hands too. 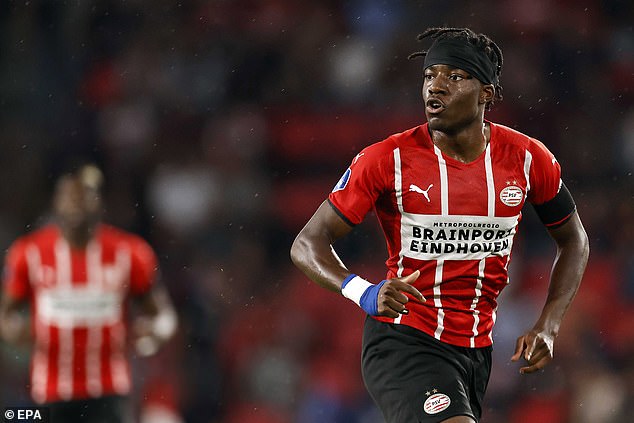 PSV do not want to sell Madueke, who has three years left on his contract though, with the interest mounting, retaining Madueke might be easier said than done.

PSV’s original plan was to hold onto Madueke until next summer. Then he will have two years left on his contract which they consider the ideal time to cash in and still recoup a reasonable fee.

They also believe another season in Holland could see his value sky-rocket while the number of teams in the market for a wide player might be even bigger than it currently is.

Madueke’s suitors, though, are increasingly viewing now as the perfect time to make their move and test PSV’s resolve with offers that meet their valuation. 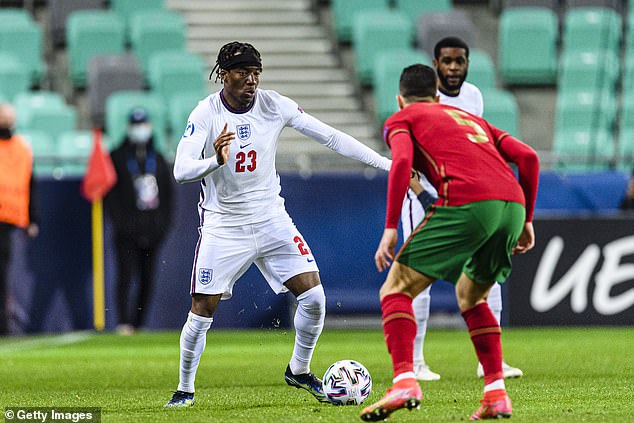 PSV do not want to sell Madueke, rated at £34million and who has three years left on his deal

That price is around £34million, the sort of sum PSV previously anticipated he might be worth in 12 months’ time, underlining how much he is developing ahead of their schedule.

If Madueke’s current trajectory continues he could be worth as much as double this time next year – something the clubs watching him will also be mindful of.

Reaching the Champions League group stages and being able to offer Madueke at least six games on the biggest stage in European club football will increase the chances of the plan PSV had mapped out remaining on track.

It is why his growing list of admirers will be watching and waiting to see if they make it through against Benfica.

October 3, 2021 c_admin Football News, Premier League Comments Off on Thomas Frank is ‘100 per cent’ sure Ivan Toney will earn England call-up in the near future

PAUL NEWMAN: How England could do with a Trent Bridge special from Jimmy Anderson in India opener

August 3, 2021 c_admin Euro 2020, Football News, International Comments Off on PAUL NEWMAN: How England could do with a Trent Bridge special from Jimmy Anderson in India opener

England were meant to be gaining momentum now, rest and rotation behind them, in their grand plan to peak in time for this winter’s Ashes. It has not quite worked out that way.Instead they go […]

There is nobody better at getting his message heard than England forward Marcus Rashford.Whether he was discussing his recent reception with Barack Obama, his relationship with Sir Alex Ferguson or his inspiring fight against child […]