It has been a while since I was able to write about my favorite club Feyenoord. Oranje is our first topic always and the exploits in the top by our lads is what will be the next priority. Usually, Feyenoord is not very prolific in that domain.

After a successful spell under Gio van Bronckhorst (now semi finalist in the Europa League), Feyenoord slipped again with the likes of Jaap Stam and Dick Advocaat not able to restore more glory. Yes, Dickie didn’t do too badly, but the quality of the football wasn’t there. Dick is an old-school coach and Feyenoord played old-school football.

The arrival of Arne Slot (and Frank Arnesen) changed matters in Rotterdam. One of the first things Slot said to the Feyenoord board: “Do not sell Geertruida!”. The young right back is essential in Slot’s plans. He loves multi functional players and with Geertruida as right back and Malacia as left back, Feyenoord restored it’s identity and has two local boys as full backs (and a local boy in Bijlow as the goalie).

Slot introduced his style of football (and coaching) to the club and it has paid off big time. The friendly win over Atletico was seen as a fluke victory (Atleti took that game very serious) and an almost stumble against lowly Dritta almost ended Feyenoord’s campaign in Europe, but since that game (Til scoring the essential goal late in the second match) Feyenoord thunders through the Conference League with gusto.

An example of red-market Guendouzi who slots into right back while the right back is slightly visible in the bottom of the pic.

The first leg versus Olympique Marseille ended up an epic battle between two former European behemoths. So many similarities. The cities, both port cities. Both clubs have highly passionate and infamous “legions” of supporters and in both stadiums the atmosphere can be daunting on the best of days. Both clubs won European trophies in the past and both clubs have to make do with a 2nd, 3rd or even 4th spot in the domestic tables.

There are also differences. Olympique can be considered a somewhat older team with a seasoned coach in Sampoli, while Feyenoord can be seen as a young team, with an up and coming coach (in European terms) in Arne Slot.

The first leg ended in a 3-2 win for Feyenoord. How did they get so many opportunities? And how did they allow Marseille back into the game?

Marseille Build Up was exactly how Feyenoord liked it

Olympique used right back Rongier and right mid Guendouzi as a tactical trick in the build up. They changed roles to confuse Feyenoord. The right back would push up to mid field and Guendouzi would drop into the defenders space to start the build up with dribbles or passes. This type of positional change makes it harder for the opponent to develop pressure. But as their midfield became quite wide, with Rongier hugging the line, it became easier for Feyenoord to block the passing lines and the intelligence of Kökçu and Malacia resulted in forceful forward press. Slot: “I pushed Kökçu further up field and in this way we were able to control Guendouzi.” 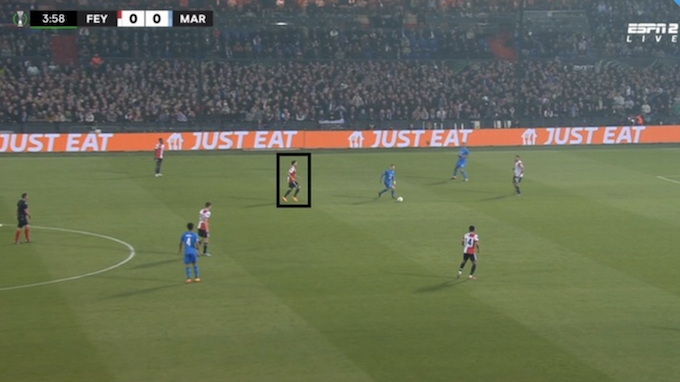 Smart interruption of the usual build-up passing lines of Olympique

This is a good example, in the 5th minute as Feyenoord’s press stops the OM build up. The only way out for the visitors was to play loopy balls to the wide areas, where Tyrell Malacia in particular was ready to be super tight on the receiving player, not giving the opponent time to think. In this example below, Guendouzi loses possession due to a bad take under pressure. 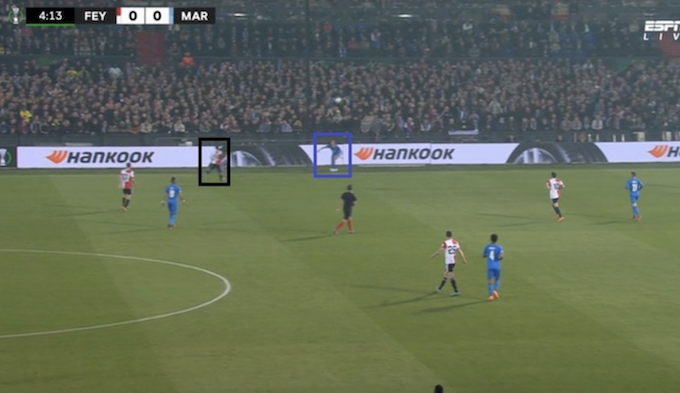 Slot: “In the second half, they changed it and played a more traditional way, with midfielders staying in midfield. We had more issues in pressuring them as a result.”

Geertruida didn’t do what Malacia did….

Geetruida played a fine match but in one instance he didn’t do what Malacia did so well on the left. The 2-2 was the result. Slot: “Here Geertruida decides not to press. And everything we have done so well before, we simply didn’t do in this situation and you see, immediately the opponent gets a chance. Geertruida should have pressed the player on the ball. Not give him time. Now he could dribble forward, look around, look around again and then find Payet free in midfield who had slipped away from Aursnes. When they find the pass towards Payet, anything can happen.” 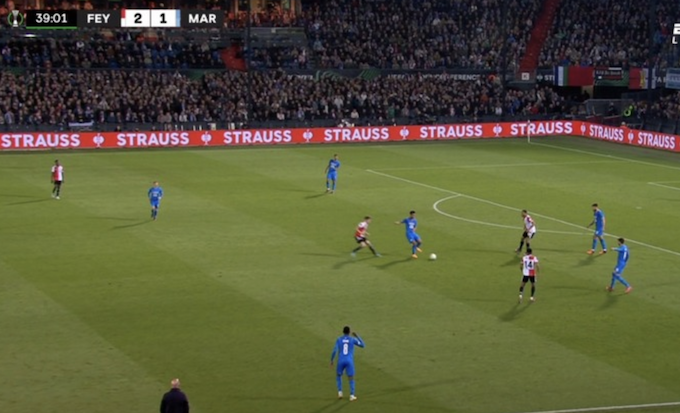 This is the moment. Nelson, Dessers and Til are developing their forward press, but Geertruida is not present on the right, offering Gerson time and space. 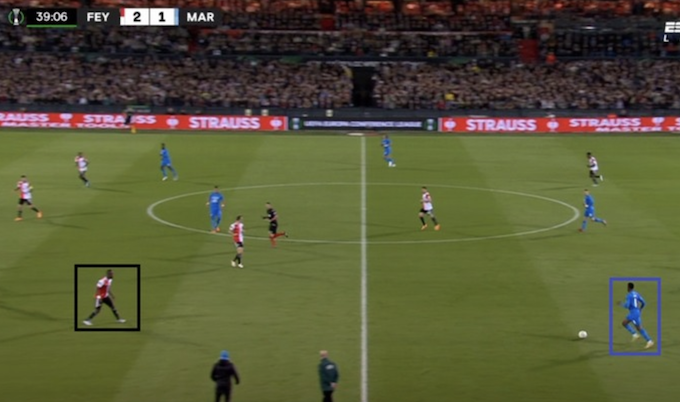 What started as a slight omission in the execution of the tactics, ended up a goal for Olympique. This does speak to the tremendous qualities Marseille does have when offered the chance.

The Speedy Wingers of Marseille

The 2-1 was less a thorn in Slot’s side. “The 2-2 really was avoidable. The 2-1, well… A long ball, the second ball was theirs and then there was the explosive sprint in behind. Very hard to defend if it is executed well. We also got chances and goals in this exact manner. Sampoli used Payet as false striker and he was able to launch one of the runners. A good decision by the coach.” 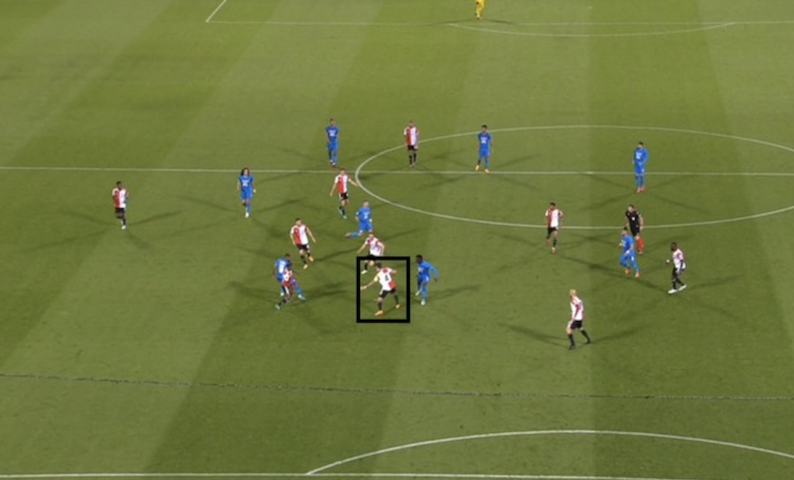 Senesi has to make a snap fire decision. Press up and take the ball or drop back. The Argentinian skipper decide to push up and he missed the chance to intercept the ball. Dieng still had a lot to do and his powerful shot faded away from goalie Marciano, who may have been standing to much in the centre of the goal. 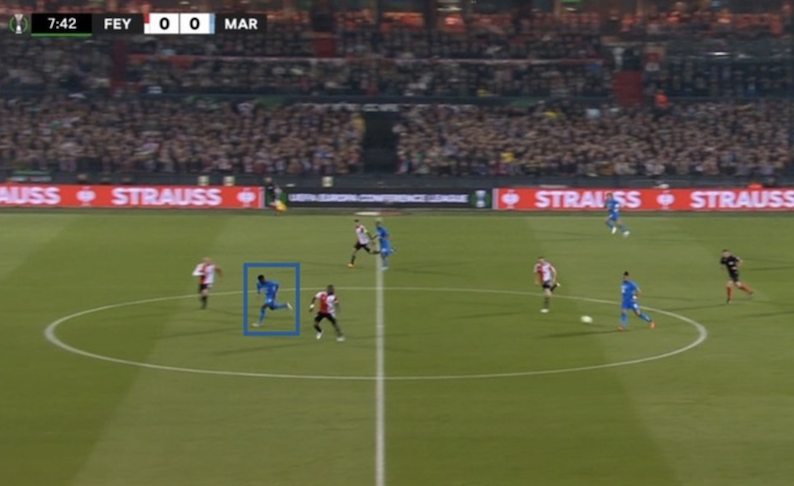 Dieng did get more chances, earlier in the game. Both situation should have been a warning sign for Feyenoord. In the 7th minute he escaped on a Payet through ball as he did in the 13th minute. 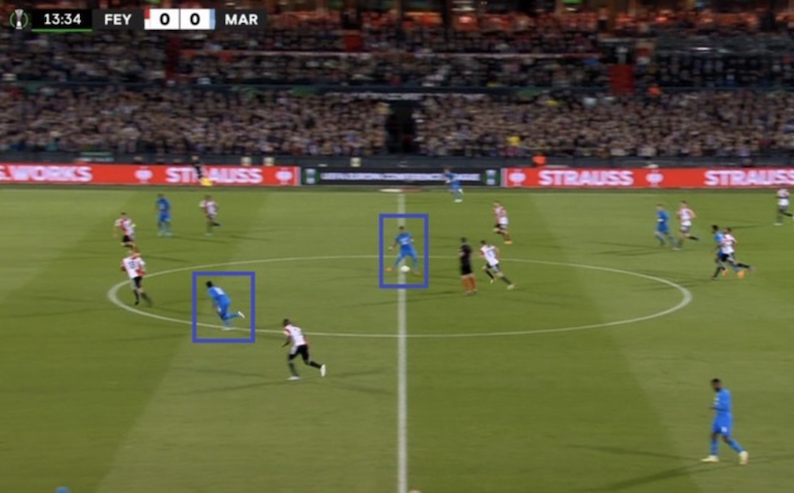 Marciano was able to stop the first attempt and Dieng missed the target on the second. Two warning shots at 0-0. Anytime Payet has the ball and the ability to look, the forwards bomb forward and Payet will usually deliver. Not unlike the Robben-Sneijder combination in 2014 Brazil.

Slot: “It was hard to play him, he was their #9 on paper but he goes where he wants and he is not easy to stop. I think we did really well in most situations in the first half, even though he had three great passes, one of which ended up a goal. I think he was even more dangerous in the second half.”

This is a good example, in the 74th minute, when Dieng again is able to escape Senesi. Payet spots it and passes the ball but this time it’s Marciano who is paying attention. 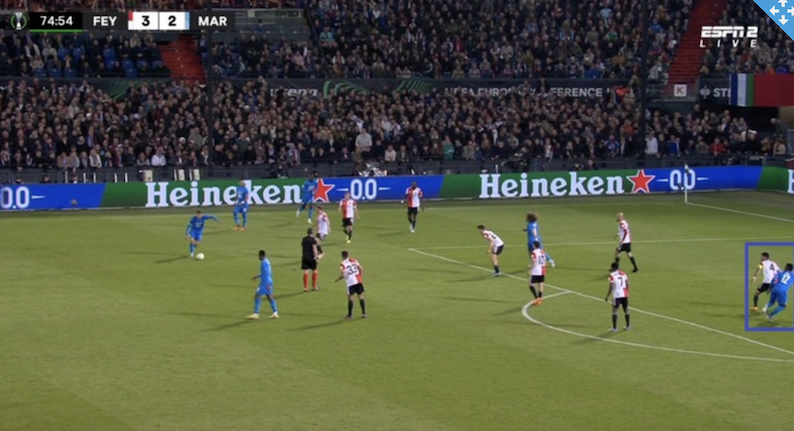 The 85th minute was a nice move from both teams. Marseille did what Feyenoord has done so well. The “running in behind” move (see next point). The forward, in this case Milik, drops to midfield, luring the defender (Senesi) with him. Only to suddenly turn and run in behind, expecting the ball to come.

In this situation, sub Hendrix is able to push OM sub Harit to the side. Harit’s pass is intercepted by Senesi, who immediately finds the pass to start a Feyenoord counter attack. And the open end-to-end game kept on going in this way, with a big chance for Jahanbaksh even, in the 91st minute to make it 4-2. His shot missed power.

The Running In Behind Trick

Slot: “We work hard on our depth. We want the forwards to use their speed and timing to get in behind. Both goals were the result of this. Marseille’s last line of defence always pushes up. Like ours does too. As a forward, you can easily be off side as a result. You need to drop back as forward, maybe even making a run diagonally back to your own half, only to turn and explosively launch yourself when that pass is coming. Today, we had a couple of really good moves this way, resulting in two goals.”

This below is Sinistera’s move for the first goal. He will start his run way on-side to garner speed and bamboozle the defence. When Senesi passes the ball, Sinistera is already on his bike while the defenders seem locked into place. 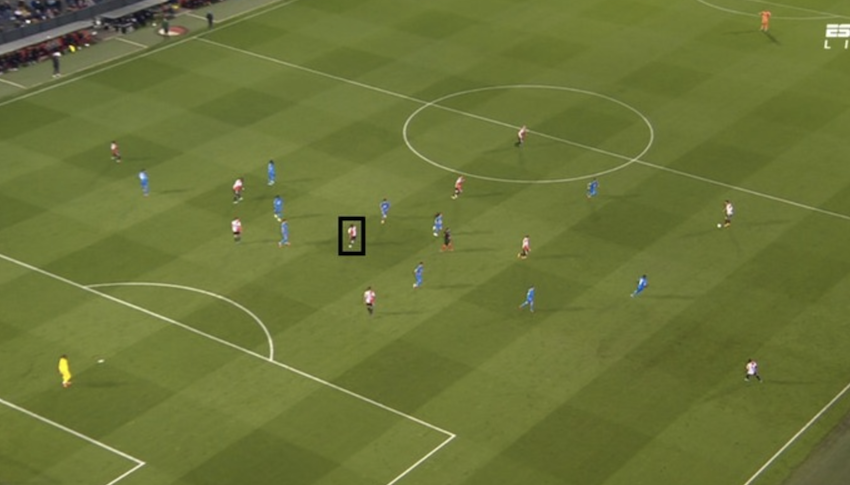 With the second goal, Arsenal loanie Reiss Nelson demonstrates it even better. Every move deep would have meant off side. So Nelson makes the run back, diagonally, and turns when he knows/feels/sees that Trauner is going to play that pass deep. When the ball reached Nelson, there was no opponent even close. He kept his calm and found Sinistera who scored with a touch of fortune. Slot: “Our movements surprised them, we were able to get through to them a couple of times in the first half before they could fix their problem. The timing of these moves is really important and the boys did really well. 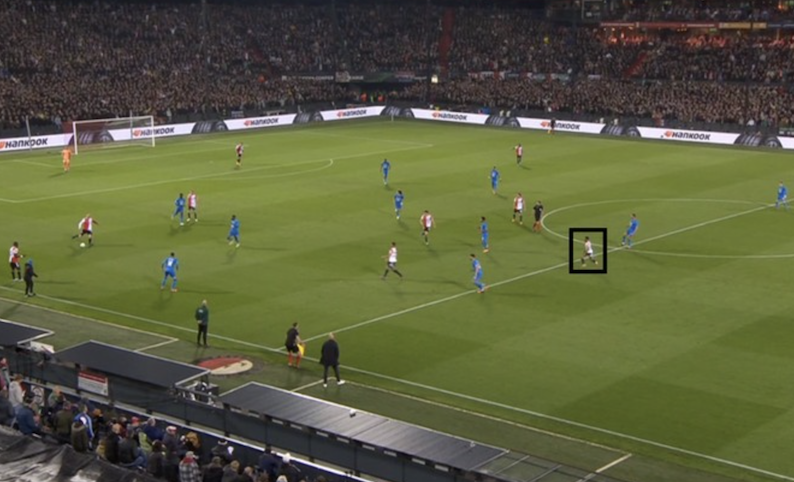 Out of the pic, all the way up is the OM right back playing Nelson on 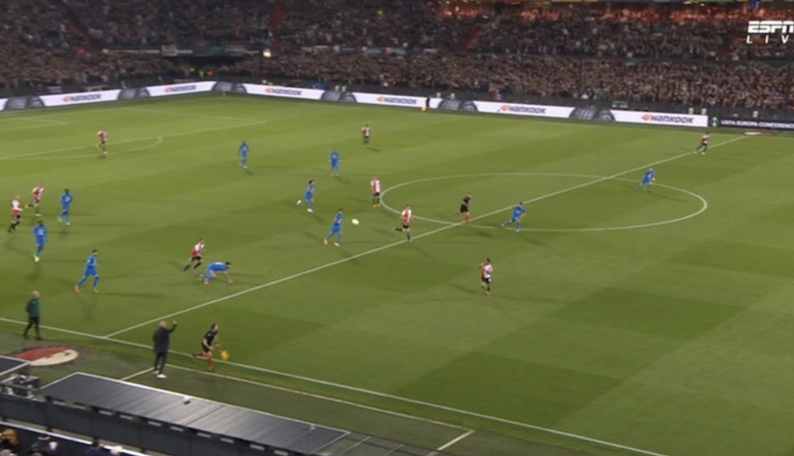 As said before, Jahanbaksh got himself into a similar situation late in the dying minutes but his attempt failed. Linssen wins the header, the second ball is pushed in behind by Sinistera and the Iran winger is already on the move to leave the defenders in suspended animation. 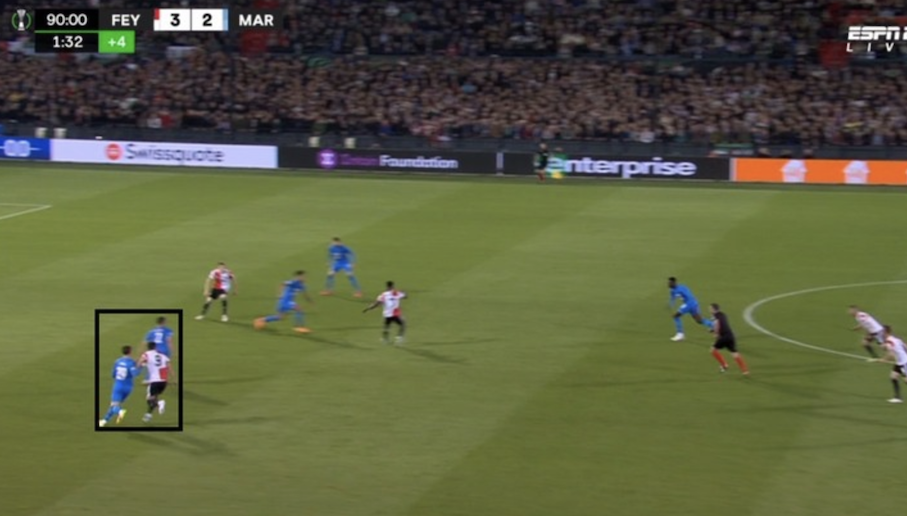 Jahanbaksh makes his run from an onside position

This last missed chance means Feyenoord will go to Marseille with a 3-2 win. What can Slot expect there?

Slot: “I need to analyse the game as I haven’t watched it back yet. I don’t know what will happen next week. Both Feyenoord and Marseille have several weapons, so to speak. With Sampoli, you never know what you get. But next week, we’ll know.”

What do you guys think? Will Feyenoord reach the finals?

Feyenoord have completed the signing of defensive midfielder Fredrik Aursnes from Molde on a three-year deal.Feyenoord have already raided Molde this summer for full-back Marcus Holmgren Pedersen and now they have returned to the Norwegian […]

Feyenoord have completed the signing of Cyriel Dessers on loan from RC Genk, while Ridgeciano Haps has departed for Italy.Feyenoord had already announced the loan signing of Arsenal winger Reiss Nelson and they followed that […]