A move to Stamford Bridge was rumoured last month after Mendes met with new Blues owner Todd Boehly to discuss a potential transfer.

SunSport exclusively revealed how Boehly was keen to snap up the five-time Ballon d’Or winner.

But Chelsea ultimately pulled out of a deal to sign the 37-year-old with boss Thomas Tuchel turning down the chance to bring him in.

It was recently claimed how Tuchel was told NOT to secure the services of the Portugal international by his German compatriot and ex-United interim manager Ralf Rangnick.

After snubbing Ronaldo, Chelsea turned their attention to Barcelona’s Pierre-Emerick Aubameyang in they hope they could lure him back to England after his Arsenal exit earlier this year. 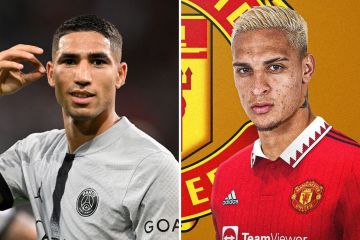 However SunSport understands Tuchel’s hopes of a reunion with the 33-year-old is stalling over personal terms with Chelsea only prepared to offer him a one-year deal.

According to the Independent, this has led Ronaldo’s representative to return to Chelsea to investigate whether they would resurrect a deal for the forward.

But they state that as of the weekend, Tuchel still has reservations over Ronaldo.

But Chelsea do hold an interest in Crystal Palace winger Wilfried Zaha, who is in the final year of his contract at Selhurst Park.

Premier League top scorers 2022/23: Who is leading race for the Golden Boot?

United manager Erik ten Hag has refused to guarantee whether Ronaldo will stay at United beyond the summer having started him from the bench in the club’s last two games.

Asked if the Real Madrid legend will remain at Old Trafford, Ten Hag said: “I can’t say that.

“We plan with him. We stick to the plan. We want him to stay. That is what I want.”

Pressed on whether Ronaldo will still be a United player come Friday morning, Ten Hag could only add: “I hope so.”

[ad_1]You can say and claim what you want about Roman Abramovich, I am not here to argue anything. But one thing looks clear to me, and that is a certain MPs claims of Roman Abramovich […]

[ad_1]Steven Gerrard insists he has every confidence in any academy players he may have to throw “in at the deep end” against Chelsea on Boxing Day.Villa’s scheduled Premier League game against Burnley last Saturday was […]