We’re not used to this.

After the joy and optimism of the Community Shield victory and the performance that accompanied it, Liverpool find themselves with their backs against the wall and seven points off the summit without yet breaking the back of August.

Thirty-five games left to play, but a very real possibility that the season can get away from this team if fortunes don’t change promptly.

A pitfall of setting standards as high as this squad have done is how discernible the shortcomings are when those standards are not kept.

By falling short of the levels expected Liverpool have caused widespread concern about the immediate future, and the lethargic showing on Monday has epitomised those early struggles.

Defeat at Old Trafford stings more than most, and that is especially true when it comes at such a difficult time for the Mancunian brethren. Liverpool lacked the fight that we have become so accustomed to seeing, and unfortunately, a quite average Manchester United wanted it more. A tough pill to swallow.

We looked devoid of belief, which is difficult to comprehend when you consider the sheer quality they have consistently displayed during Jurgen Klopp’s tenure. Confidence is a fragile commodity, but this group of players have given themselves no reason to believe that they can’t go to places like Old Trafford and act like they own the place, just as they did last season.

This is not a time for radical changes or a reboot, it is a time for gentle reminders that these are among the greatest players the football club has ever seen, and they need to spend these next couple of weeks showing it.

Injuries will always count for something, especially when the list is as extensive as ours, but the sides the Reds have faced to this point have been markedly inferior despite those absentees. The displays haven’t left us with much to cling to for the coming weeks.

Bad patches happen in football, but it is the lack of glimpses which has been perhaps the biggest point of concern. The post-mortem following United is necessary but right now the only thing that can be controlled is what comes next, and the reaction needs to be swift and emphatic.

The mother of all hangovers

You might not be in the mood for excuses, and at this moment in time that is perfectly admissible, but there can be no disputing the mental and physical toll that a 63-game season in which every single minute mattered can have, even on the very elite. 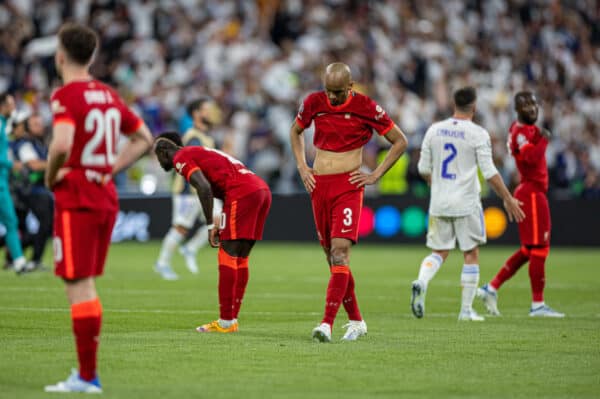 Liverpool ended a 30-year wait for a league title and instead of a parade were greeted with an almost immediate follow-up season and simply asked to go and win the thing again. All of this behind closed doors and never celebrating with supporters.

They then followed a turgid covid-hit season with perhaps the greatest campaign a Liverpool side has ever put together but were unable to quite grab the two trophies they wanted most.

The challenges which come with attempting to go to a place no team has gone before were always likely to trigger repercussions for the following season, the new challenge will be to stave off any further damage.

A machine as well-oiled as Liverpool’s requires all of its moving parts to work in conjunction with each other. One or two players struggling for form and another handful absent with injury can quickly throw things out of kilter.

Marathon not a sprint

We have become accustomed to a world in which only upwards of 90 points will suffice, and this is why the opening three results have felt like the end of days.

Liverpool need a response and they need it quickly, but if we’ve learned anything in the past six years it is that we can trust this group of players to put things right.

The phrases ‘character’ and ‘mentality monsters’ are easy to throw around when things are going well, but it is in times such as these that the players have the opportunity to demonstrate it.

Onto Bournemouth then. There are quite frankly no gimmes at this stage but if you were to hand-pick a fixture to get a season back on track this one would be towards the top of the list, and the crucial thing will be to make that count for something.

There can be no space for mitigation, only three points will do.

Everyone will have to be on their game, and that applies to the supporters as much as it does the players. Everyone is entitled to lose their minds in pubs, on social media and among friends after performances such as the United one, but those fortunate enough to be in the stadium on Saturday afternoon have a duty to play their part in helping begin to turn this ship around.

[ad_1]Photo by Marc Atkins/Getty ImagesDiogo Jota is suddenly an injury concern for Liverpool now.Jurgen Klopp’s side have a Champions League clash away to Atletico Madrid on the horizon a little later this month.But reports from […]

[ad_1]As Liverpool and the rest of the ‘big six’ await sanctions from the Premier League and UEFA, the Reds have done their best to shoot themselves in the foot again on the pitch.Sanctimony and a […]

[ad_1]Liverpool could look to make their reported interest in highly-rated starlet, Fabio Carvalho, concrete should Fulham look to earn a transfer fee before the player’s contract expires this summer.This comes from James Pearce at The […]