It’s important to take training puff pieces and news with a grain of salt, but Preseason Week 1 gives us a slightly clearer picture of how teams are using their new pieces, how injured players are rehabbing, and how rookies are acclimating. There is no shortage of storylines from Preseason Week 1, let’s dive in:

George Pickens dominating has been a consistent theme this offseason. After unfortunately tearing his ACL before his final collegiate year, Pickens has been the talk of the town at training camp. Beat writer Mark Kaboly even said that he had never seen “…a rookie this good, this early”.  Then, Preseason Week 1 happened – here are all of his receptions in a 3-43-1 breakout performance:

8 WRs were drafted before DK Metcalf.
10 WRs went before George Pickens.@PSchrags is wondering if this could be the same thing.

“Did the Steelers just get themselves a star at wide receiver and do so in the 2nd round with the 52nd pick?” 🤩 pic.twitter.com/BYDEAQB69P

We have to remember that Pickens had an amazing 30% dominator rating in his true freshman season, a statistic highly correlated to fantasy football success. Even if you’re more a tape grinder, film guru Greg Cosell called Pickens the top wide receiver in the 2022 draft back in June (before he even began dominating on the field).

We can be sure that a healthy Diontae Johnson leads this team in targets, but Chase Claypool only recently returned to practice after missing time with a shoulder injury. If Pickens continues to dominate the targets will come at the expense of Claypool, who may be on a bit of a hot seat after a very disappointing sophomore campaign. We’ve seen talented rookie wide receivers dominate time and time again: from Odell Beckham to A.J. Brown to Justin Jefferson to Ja’Marr Chase, the cream always rises to the top. He’s a dark horse for a rookie year breakout.

The main concern is becoming his price. Previously almost free in drafts, he is beginning to be taken as early as the 10th/11th round (courtesy of Rotoviz):

Even with his increased ADP, he is still sandwiched by inferior selections like Kenny Golladay, Michael Gallup, Jakobi Meyers, and D.J. Chark – all of whom have concerns of their own.

This summer, I discussed how to look for the next Cordarrelle Patterson. Arguably the biggest signal in looking for later-round running backs is taking younger, talented backups who are behind ordinary veterans, and Dameon Pierce fits the bill perfectly.

Unsurprisingly behind the corpses of Marlon Mack and Rex Burkhead at this time of year, Pierce did things that neither of the “co-starters” can do in his NFL debut:

Dameon Pierce has the highest rushing grade of any RB in the preseason (90.0). 5 carries, 49 yards, 42 yards after contact. pic.twitter.com/CVk1oQh1l0

Pierce has apparently looked like the team’s best running back in camp, and his Preseason Week 1 performance left John McClain – arguably the greatest and most plugged-in beat writer in the sport – to assert the following:

If rookie RB Dameon Pierce isn’t starting the first game against the Colts, the Texans aren’t putting their best lineup on the field.

There was already buzz back in June that Pierce should have the chance to be the alpha in this backfield by the end of the season, which is something vitally important when selecting our bench. We want our teams to be peaking by the end of the season, and Dameon Pierce is looking likely to fit the bill for such a strategy. He’s certainly worth drafting at ADP and is a fantastic Zero RB candidate.

Zach Wilson was far from good as a rookie, but the fantasy community has been holding out hope that a sophomore leap from him could unlock the young Jets offense. That hope is now on hold for multiple weeks after a non-contact knee injury in his Preseason Week 1 action:

#Jets QB Zach Wilson is flying to LA to have meniscus surgery from Dr. Neal ElAttrache, with the hope that it’s a trim. Reality is, the decision for what kind of surgery will be made once ElAttrache is in the knee.

Even more ominously than his 2-4 week public timetable, Dr. David Chao has doubts that he even returns in the first month of the season. Zach Wilson’s injury likely won’t have an effect on quarterback ADP outside of Superflex/2QB contests, and considering how bad he was on 2021 it isn’t a death knell to the Jets’ offense either.

Next up is Mike White, who helped unlock now-promising sophomore Elijah Moore last year. Take a look at Moore’s production when either White or Joe Flacco (!) was throwing him the ball: 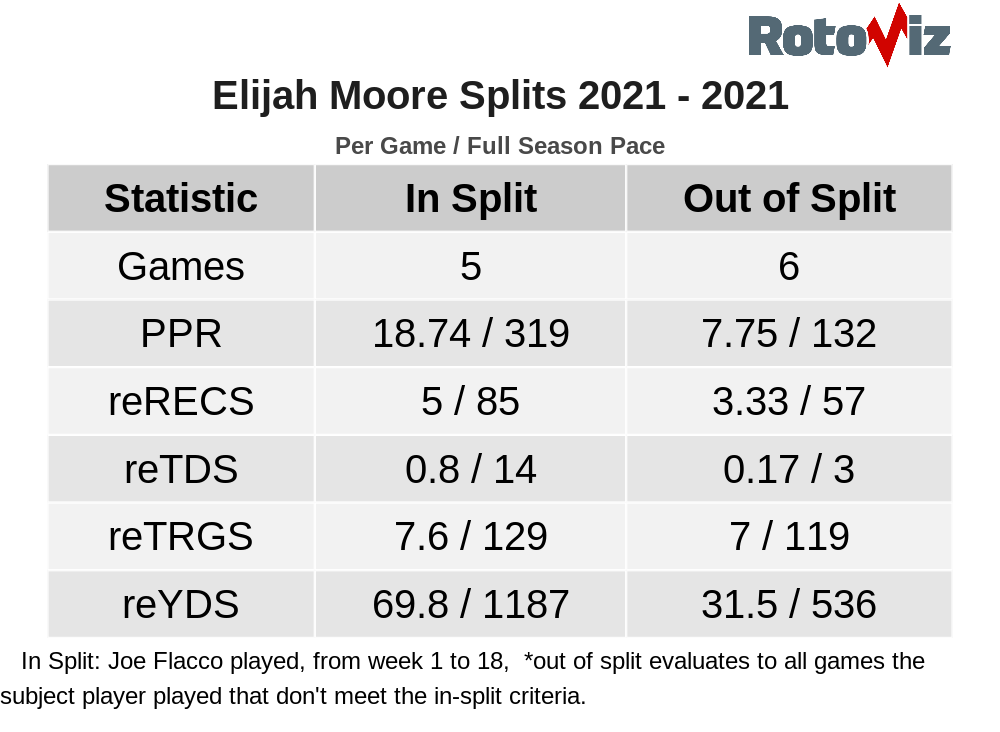 We have written about Elijah Moore extensively and are super bullish on him, and the above data should ensure that you don’t shy away from him after this news!

About two weeks ago, I discussed how Alvin Kamara was looking less likely to be suspended based on his legal proceedings thus far stemming from an assault charge. This is looking even more solid now after Adam Schefter recently confirmed the fantasy community’s suspicions:

ESPN’s Adam Schefter reports that it’s ‘more and more unlikely’ Alvin Kamara will be suspended in 2022, with his latest court date delayed until after the season starts: https://t.co/GkY13ELIR9

This is pushing his ADP solidly into the second round in the vast majority of fantasy leagues. His projection is a tale of two narratives: is his age (27) and target competition (healthy Michael Thomas, adding Jarvis Landry and Chris Olave) finally going to catch up with him, or are we going to see more of the player that has finished in the top 9 of PPR RB scoring every year of his career? Whichever of those narratives wins out is going to determine whether Kamara finishes his 2022 as a value in fantasy leagues, or a shrewd player to avoid while selecting Saquon Barkley or D’Andre Swift instead.