Aug.22 – Red Bull will need to take a lighter 2022 car through renewed FIA crash testing, it has emerged.

The energy drink owned team and championship leader Max Verstappen have made no secret that the RB18 is still easily over the minimum weight limit.

At the same time, Red Bull suspects that Ferrari is close to the weight limit and therefore the potential for a 2-3 tenth per lap surge in pace as possible. 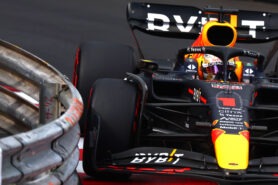 He said Red Bull is working on a lighter monocoque, which won’t just cost about EUR 2 million but also trigger a new round of mandatory FIA crash testing.

It is believed another team has also alerted the FIA to the need for follow-up crash testing in the near future – but it isn’t Mercedes.

“That would be far too expensive,” a source at the Brackley based team said.

“Not just because of the crash tests – you’d have to build three new chassis and that costs you EUR 2 million extra.”