In addition to winning the 2010 AMA/NATC MotoTrials Pro National Championship, Cody Webb has been one of the top American extreme racers and hard enduro specialists for the past decade, winning three AMA EnduroCross titles in the process.

Webb was fresh off a wrist injury when he finished ninth at the recent Tennessee Knockout (TKO), but before the race, we had his mechanic Cody Richelderfer give us the lowdown on Webb’s 300 SE Factory set up for hard enduro racing. Here’s what we learned about it.

Cody Webb’s 2023 Sherco 300 SE Factory is a combination of stock parts and aftermarket components, with a few special items thrown in. (Shan Moore/)

The shock is basically stock, but with softer settings for hard enduro. And although it may not appear to be, the KYB 48mm coil-spring fork is the same component that comes on the bike.

“It’s not A-Kit, technically,” Richelderfer said. “It’s basically a stock fork internally, but we added a Kashima coating. It works pretty similar to our stock fork; [it’s] a closed-chamber, just with the coating. It’s 98 percent the same fork. Johnny Weisman at The Ride Shop in Arizona does all of our suspension for all of our guys at this point.”

“You can see it’s got quite a bit of movement in it, which is nice,” he said. “You don’t feel it when you’re riding in a negative way; it just absorbs the impact. Everyone [on the team who has] tried this has chosen to use it. They’ve always had the option and nobody has said no to it, so it’s been a good addition.” 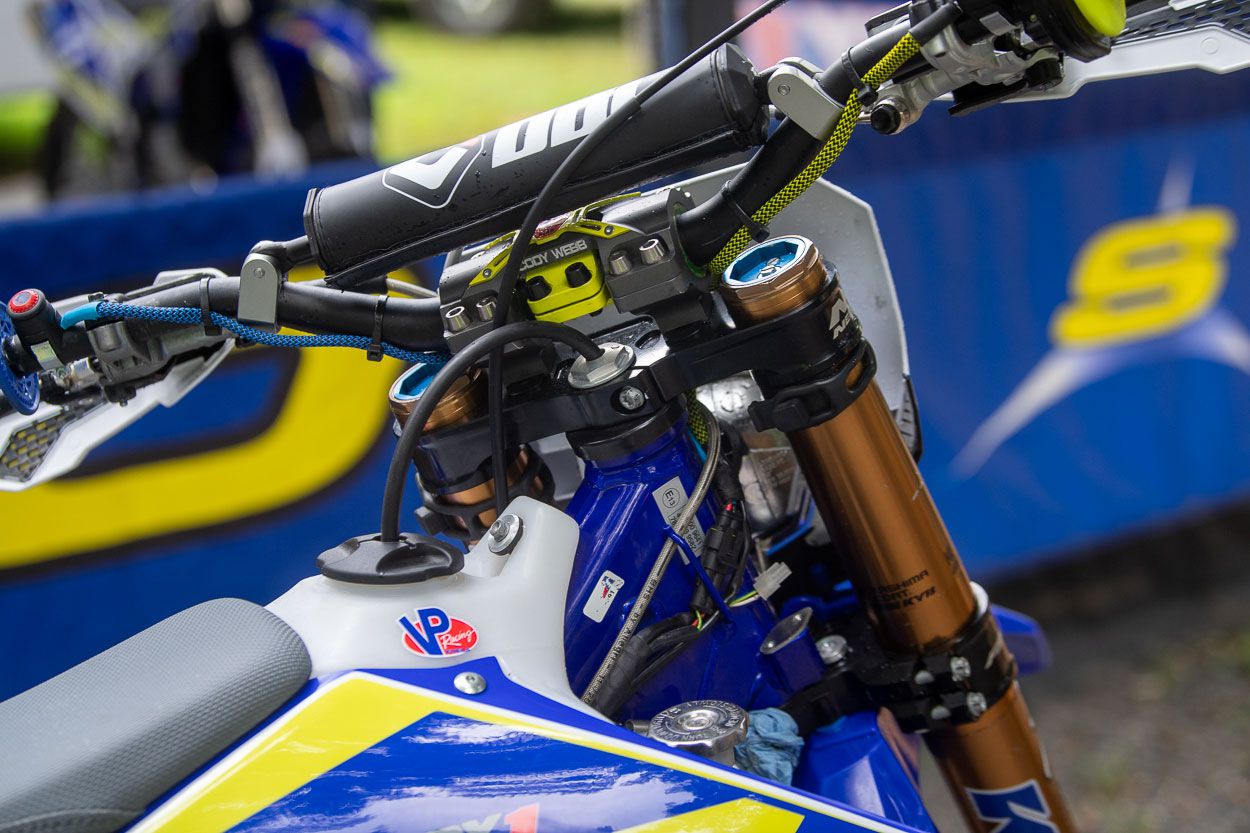 Webb runs XC Gear handlebar mounts with the soft green polymer, which are affixed to Neken SFS Air triple clamps. Surprisingly, even though he’s six-foot-three, Webb doesn’t raise the handlebar to accommodate his height. He does lots of experimentation with many different bar bends though. (Shan Moore/)

Webb’s handlebar is an ODI CFT Podium MX in the KTM 16-18-bend with soft ODI grips; although Richelderfer told us that Webb is constantly changing bar bends.

“He was running the McGrath bend, which was lower; ironic because being 6-foot-3, he runs a low bar with no bar riser,” Richelderfer said. He added that Webb usually cuts away a couple of ribs from the grips for comfort.

“Naturally, when you lower the pegs, it also effectively moves them back because they are angled,” Richelderfer said. “I think they’re 5mm lower. You can flip the insert around and this is the low setting, which is about 5mm back.”

Bullet Proof Designs supplies the rear disc guard, while the skid plate and linkage guard are from P3 Carbon. The stock FMF pipe is employed along with an FMF titanium silencer for a tad bit of weight savings.

“This is basically the production pipe; anybody can buy this pipe,” Richelderfer noted.

Related: What Is the Most Difficult Hard Enduro Race In the World? The FactoryOne Sherco team was in the process of switching to T-Rex throttle assemblies, but for the TKO, Webb was running a specially-made billet housing with a map switch built into it. However, Richelderfer had the map switch unplugged, since Webb never uses the slow map. ARC Levers is a sponsor of Sherco USA, and Webb prefers the aluminum versions.

Polisport flag hand guards protect the levers and Webb’s hands from annoying branches and debris. Richelderfer added that they bolt right onto the master cylinders, which is a nice touch. Speaking of which, the front and rear brake master cylinders and calipers are all Brembo components.

The wheels on Webb’s bike at the TKO were built by Dubya with Excel A60 rims, but he typically runs the standard wheels.

“Our stock wheels are good,” Richelderfer said. “We don’t really touch them. We just check the spokes and run them. These Dubya wheels are actually off Cody’s SuperEnduro bike. The bikes came back just in time for this race and I grabbed them and we ended up using the race wheels.”

Related: The Advantages of Running a Trials Tire on a Dirt Bike 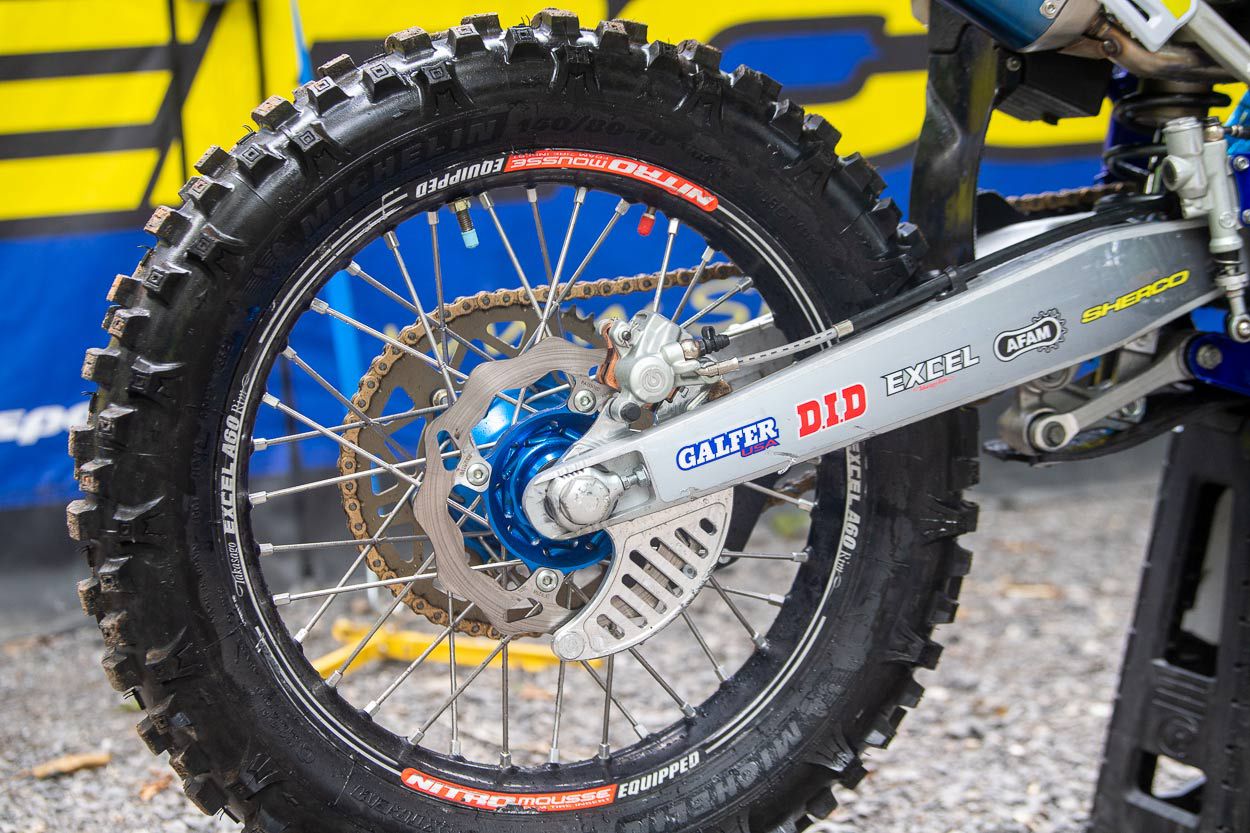 The team normally runs stock wheels on Webb’s racebike, but a trick set made by Dubya was on his machine for the Tennessee race. (Shan Moore/)

Sherco USA uses Michelin tires and Webb was running the Extreme, as were all of the European teams at the TKO.

“This is an extreme tire, which they don’t even make at the moment,” Richelderfer said. “They quit production of them because they’re doing more StarCrosses now, GNCC tires. The Extreme is the same tire the bikes come stock with, but gummier. It’s the same exact mold. If you buy a Sherco, you get Michelin tires.” Webb was running the same front tire that comes stock on the bike, which is a Michelin Enduro Medium.

The front brake rotor guard is made by P3 Carbon, the brake pads are by Galfer, and the brake rotors are Galfer components as well (stock diameter front and rear).

“We only use the larger diameter front one for Romaniacs because of the long hills,” Richelderfer said. Webb was experimenting with a 12-tooth counter sprocket at the TKO, which is specially made for Sherco USA by AFAM. Richelderfer told us the 12-tooth allows Webb to utilize third gear much more than usual. (Shan Moore/)

Richelderfer went on to talk about how the team had just switched to a 12-tooth front sprocket (stock is 13-tooth), which they are having specially made by AFAM and are now selling through Sherco USA. The rear sprocket is the stock 51-tooth.

“The 12-tooth front has been a game changer for us,” Richelderfer said. “We just switched for this year and Cody rode for the first time on a 12-tooth front yesterday. We normally wouldn’t just change the front because that’s a big difference without kind of halfway compensating the rear, but he actually left the rear at a 51 and just changed the front, and he loves it. So, that’s a four-tooth difference with just the front.”

According to Richelderfer, the 12-tooth front allows Webb to run a higher gear.

“Normally he could never use third,” the FactoryOne Sherco technician added. “Now he’s running in second [and] third all the time mostly, instead of first and second, which is a little bit better range for him. So, he has been happy with that.”

The chain is a D.I.D item, which is kept running on the straight and narrow by a BRP chain guide. Looking to the engine, the Sherco team relies on Rekluse clutches, specifically the Core Manual variety. Richelderfer added that Webb is hard on clutches, but the Rekluse holds up under the toughest of abuse. The stock Keihin carburetor and an S3 cylinder head give Richelderfer a certain amount of adjustability at the races. The head has inserts that allow the tuner to raise or lower the compression. (Shan Moore/)

“If you want real linear power, you can run the low compression insert which gives you more of a smooth powerband, which is normally better for extreme,” Richelderfer said.

The team runs the stock Keihin carburetor. “The Keihin carb—I love that carburetor,” Richelderfer said. “We run the same jetting at 90 percent of races. People think it’s picky. If you are changing a lot of elevation, that’s where the SmartCarb is nice, if your ride consists of a 4,000-foot change. We don’t do that at the race. I’m here to jet the bikes at every race. I jet all the bikes when I get there, but I run the same jetting almost everywhere.”

A FunnelWeb air filter, Super B battery, and Seat Concepts gripper seat cover round out the package. Other items include Motul oils, HBD graphics, and VP Racing C12 fuel. 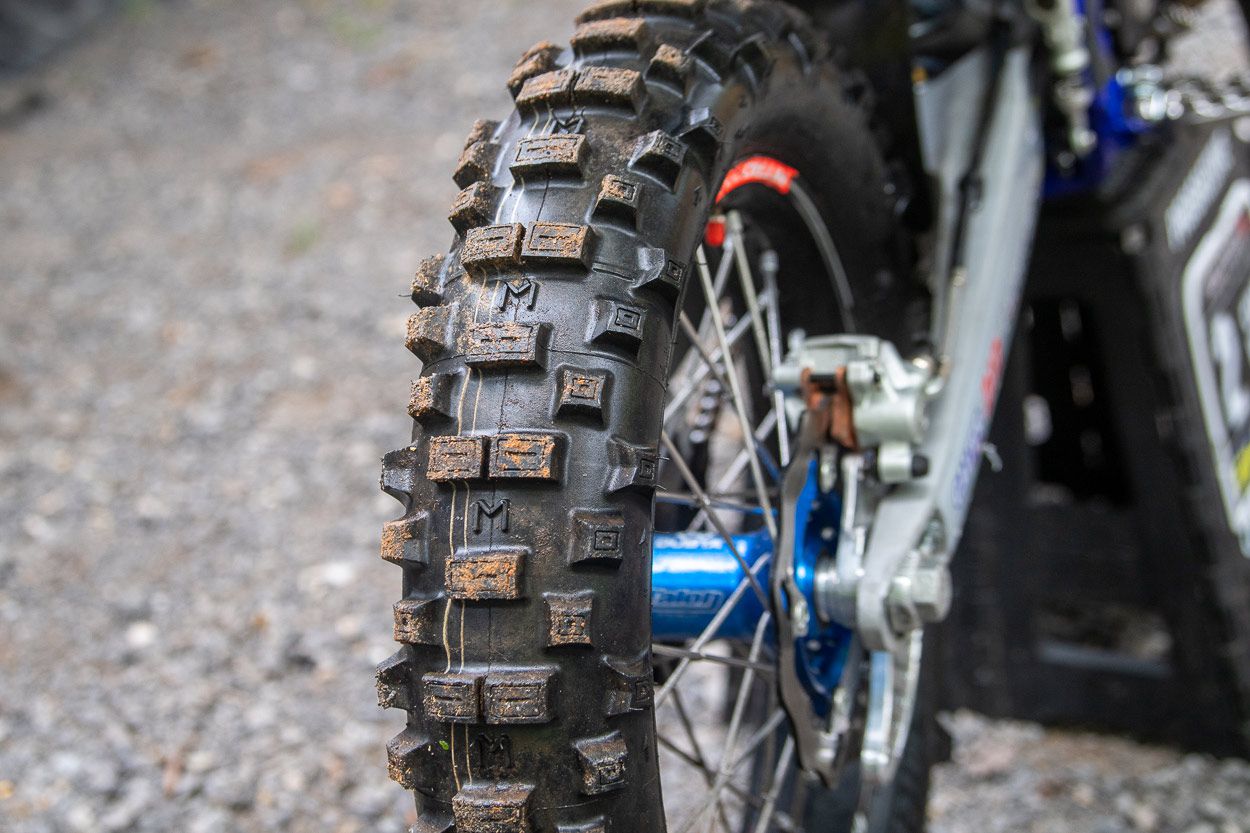 Webb was running a Michelin Extreme tire on the rear, which is no longer in production. The team is also experimenting with using a small tube between the rim and the mousse to keep the rear tire from coming off the rim due to the low pressure they run for slippery rocks. (Shan Moore/)

As far as things that Webb is the pickiest about, Richelderfer told us that he’s not that picky about much, other than the rear tire setup.

“The mousse density is the biggest thing he’s picky about,” Richelderfer said. “We run Nitromousse and we’re actually kind of playing with a tubeless kind of hybrid setup that they are making. We run a mousse, but the problem [with] mousses is that the tires are so soft that they pop off the bead. They fall into the center of the rim, which for us is just normal because there’s nothing you can really do about it.

“So we are experimenting with a mini tube that fits between the rim and the mousse,” Richelderfer said. “A tubeless inner tube, like a bicycle tube, that keeps the tire seated. It’s just a small bladder on the inside that keeps the beads on. It doesn’t affect the outer pressure. So now we can run a mousse and also a little bit of pressure. It’s on the rim itself, so that way we can keep the bead on all the time. It doesn’t feel quite so wallowy, but you can still run the soft pressure. We’re just testing it now. It’s basically Nitromousse’s tubeless setup, with a mousse in it.”