Drama occurred in the men’s doubles party in the quarter-finals as a fierce match ended in heartbreak for Indonesia’s giant-killers. 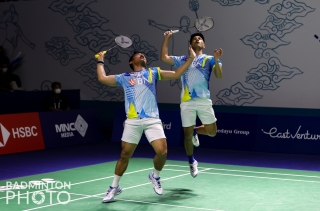 The tightest men’s doubles match on Friday in Jakarta brought together Malaysia’s Aaron Chia / Soh Wooi Yik with the rising stars from Indonesia, Pramudya Kusumawardhana / Yeremia Erich Yoche Yacob Rambitan.   Not only had the local favourites upset the Malaysians to take the Asian title earlier this year, but they were fresh from their first ever win over the Olympic gold medallists.

Actually, the Indonesian pair appeared to dominate the match from the start of the first game. Even so, both made many mistakes of their own which became Chia/Soh’s advantage in the second.

The decider was very tight as the two pairs exchanged attacks. The 2022 Asia Champions  reached match point first, nudging ahead to 20-18, but unfortunately, Rambitan had landed his foot on the wrong position after trying to return the shuttle. He fell and rolled over in pain. 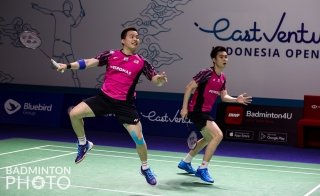 After receiving treatment, Rambitan was determined to finish the match. But unfortunately, it was very difficult for him to move and Kusumawardhana’s valiant effort to cover for his immobile partner was to no avail. The match finally closed with a win for the Malaysian pair.

“They actually played really well today, ” Chia said after the win.  “We kept falling behind a few times. Up to the point where we were behind 18-20, we actually had a feeling that we would lose. Unfortunately, our opponent had fallen.   As for ourselves, we still have a lot to improve on in our game.”

“The opponent’s game was very good and consistent.  Their defense was also difficult to penetrate. They really made it difficult for us to develop the game,” said Soh. 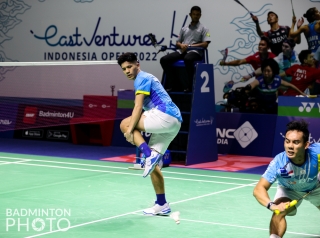 Despite the disappointing end to the match, Kusumawardhana was still somewhat positive in the mixed zone: “Actually we played pretty well. In the first game we were ahead, although in the second game we made a lot of mistakes. Even in the third game we were still ahead but unfortunately my partner got injured. If there had been no such incidents, our overall game today was very good,” he said.

After trying to finish the match Rambitan was forced to leave the arena in a wheelchair. 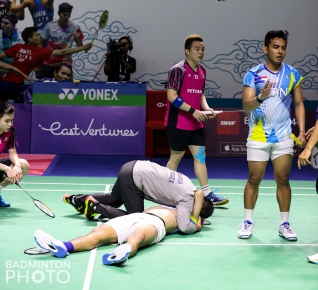 “If we put ourselves in [Rambitan’s] position, with him in a leading position and falling like that, surely we too would have tried to continue and finish the match. But I have a lot of respect for him.  I wish him speedy recovery,” said Chia.

The heart-breaking moment was when Rexy Mainaky, who is currently the coach of the Malaysian team, rushed to hug Rambitan, who was lying on the ground after the match. The Indonesian badminton legend also seemed emotional when he was met by journalists.

“I’m very sad and sorry for him. He’s still very young,” Mainaky said.  “Please keep encouraging him. He will need it a lot,” the coach added, through tears.

According to information from the Indonesian Badminton Federation (PBSI), Rambitan will undergo further examination through an MRI examination. Of course we all hope his condition will be fine soon.