Mary Moraa turned the Commonwealth 800m final into a fartlek session and shocked Keely Hodgkinson and Laura Muir to take gold in 1:57.07.

Rarely has a major race at this level been won by an athlete who yo-yo’d through the field in such a bizarre fashion.

It was exhausting to simply watch as the Kenyan flew through the first 200m in 25.9 seconds with Hodgkinson already a few strides adrift in 26.7 as she struggled to keep up with the searing pace.

Moraa still led approaching the bell although Natoya Goule of Jamaica began to pass her as they neared the end of the first lap, which was reached in 56.5.

A 30,000 crowd had turned up on Saturday night at the Alexander Stadium to see Hodgkinson, the world silver medallist from Eugene, crowned queen of the Commonwealth and the England athlete was well placed with 300m to go.

At this stage Moraa had drifted to eighth and last place but this didn’t last long as she surged down the back straight and as the runners entered the final bend she was back into fourth place and poised to strike as Goule led from Hodgkinson with Muir third.

Most runners who had gone out so hard would have been dead on their legs but Moraa was enjoying a second wind and surged past Muir, then Hodgkinson and Goule to take the win.

Behind, Hodgkinson fought hard for silver in 1:57.40 as Muir edged out Goule for bronze by one hundredth of a second in 1:57.87.

The 22-year-old celebrated her victory with a joyous dance around the finish line area and if any spectators were surprised by the result, they shouldn’t. Moraa beat Hodgkinson at the Diamond League in Stockholm earlier this summer and was just behind her in third in the world final in Eugene, whereas her 400m PB is significantly faster too.

Still, those tactics were surprisingly effective – and not planned either. Following her super-fast first 200m (1:43 pace for 800m!), she slowed to splits of 30.9, 31.0 and 29.3. When asked why she ran that way, she largely shrugged her shoulders and agreed she would not use them again deliberately if she found herself in a similar race.

“But with 200m to go, I closed the gap and then I knew I had to push myself right until the end.”

“I would have really liked to have come away with the goal that I was aiming for but Mary [Moraa] had more than me. It is what it is.”

Hodgkinson admitted this hurt far more than her World Champs defeat to Athing Mu and she says she’s determined to finish the summer with at least one gold medal – and her final remaining shot is at the European Championships in Munich later this month.

“I thought she’d slow down, but you can’t predict what people will do,” she said. “It’s often a bit hit-and-miss: you think you’ve got it and then someone comes past you.”

Muir, meanwhile, was delighted to nab bronze and said the lack of a Commonwealth medal in her trophy cabinet had been “bugging her” ever since the 2014 Commonwealth Games 1500m on home soil in Glasgow when she was well placed with 120m to go but seemed to lose her stride and fell back to 11th.

“I wanted to come here and get a medal and I’ve done that. But I want the gold,” said Muir. “The 1500m is my event. Fingers crossed the recovery will be good tonight and I will be in a good place tomorrow.” 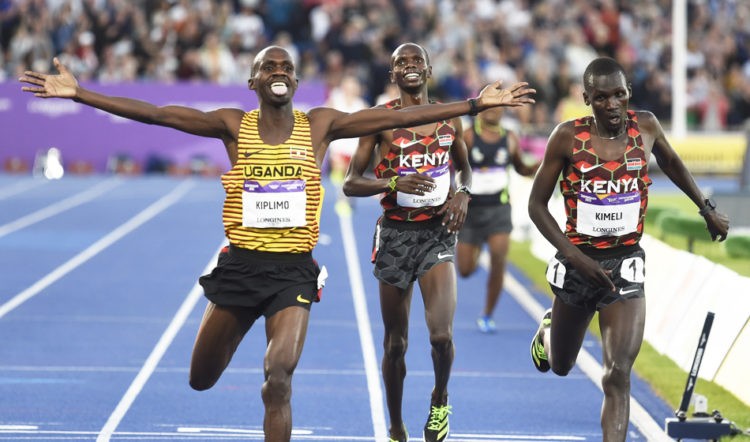 Kiplimo at the double

Jacob Kiplimo cemented his status as one of the stars of these championships as he completed a distance double by adding the 5000m title to his 10,000m crown.

The Ugandan out-kicked Kenyan duo Nicholas Kimeli and Jacob Krop to narrowly win in 13:08.08 as England’s Marc Scott, who was only eighth with two laps to go, finished strongly to take fourth in 13:19.64 as England team-mate Patrick Dever placed seventh in 13:22.10.

» To catch up with all our coverage from Birmingham, CLICK HERE